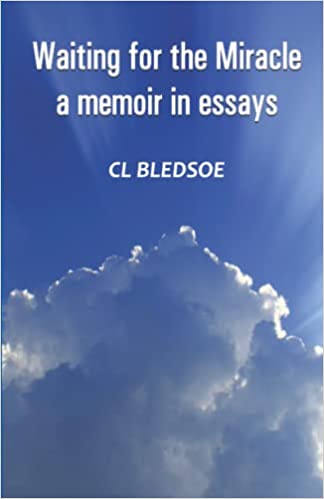 Waiting for the Miracle

A Memoir in Essays

CL Bledsoe has a new book that has a spin on the memoir.  It is one, but it’s written in essays.

His pieces are compelling.  They offer up a slice of life, and a way into someone else’s world.

The topics of his essays give a wide variety from a nursing home to feeding fish to going to church to the shakes.  There is a sense of cohesiveness to the book as each essay seems to go along with the other.

These essays investigate humanity.  He captures poignant imagery with each paragraph.

From the essay “Old Gray Mare”:

“I was in shock: one minute I’d been driving, the next we were on

fire. Not that I was surprised. I’d had that car for two years, ever since

show. My Dad spent a couple thousand on a 1986 Chevy Cavalier and

pocketed the rest of the insurance money. It overheated the day after

he bought it, so he took it to a buddy and told him to tinker with it. The

next day, it overheated again. I was ready to take the damned thing

back, but Dad held on to that car like a snapping turtle waiting for

thunder. He would pay some buddy to fix it; I’d take it out and drive it

till it broke down, which wasn’t usually that far.”

What’s most interesting about this essays is that they show the reader what it means to be living.  There is a keen sense of tenderness to each story, and a dedication to the visual.

The essays seem to focus on the familiar, but they also include the author’s unique perspective on each experience.  Each essay brings forth a harmony but also includes the shadows that come along with daily living.

There is a balance of possibilities and passion.  CL Bledsoe knows how to tell us a true story.

“Waiting for a Miracle” has plenty to say.  There is a shared sense of time and place almost like home to each one.

~LB Sedlacek’s latest poetry book is “Ghost Policy.”  She is also the author of the poetry collections “I’m No ROBOT,” “Words and Bones,” “Simultaneous Submissions,” “Swim,” and “The Poet Next Door.”  Her non-fiction books include “The Poet Protection Plan” and “Electric Melt:  How to Write, Publish, Read Walt Whitman and Survive as a Writer and Poet).  Her short story collection is entitled “Four Thieves of Vinegar & Other Short Stories.”  She writes poetry reviews for  www.thepoetrymarket.com  Find out more:  www.lbsedlacek.com