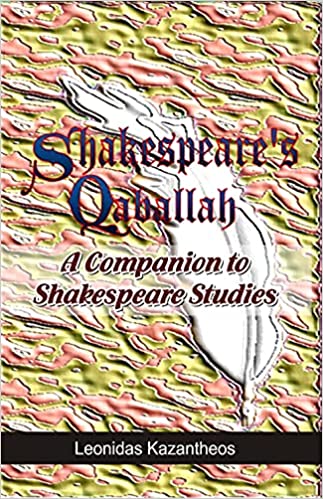 A Companion to Shakespeare Studies

This new guide to Shakespeare, contains everything you may have ever wanted to know plus more about the prolific historic author!  Kazanthes thoroughly examines every detail behind these world renowned writings.

The book is divided into three parts.  The first part examines the history behind the writer and authorship of the works.  There’s so many candidates as to who may have really written all that is attributed to Shakespeare and Kazanthes provides an in depth look at one in particular.  The second part of the book looks at the comedy, tragedy and romance plays.  While the third section deals with the historical plays and poetry.

What is most fascinating about this book is the detailed look at the cultures of the time and how these may have shaped each work attributed to the famous playwright.  Kazanthes includes influences, theatrical history explaining how all of these and more may have influenced the plays themselves.

From Chapter III:  The World As Stage

“From sometime around the 11th century throughout Europe there already existed a free-lance network of travelling shows, pantomimes, acrobats and tumblers, circuses, troubadours, and minstrels etc who made a living mainly by providing entertainment to the rural and urban regions of England, Ireland and Scotland. Some of them travelled from Europe and some were home-spun thespians who were eager to give dazzling displays of swordsmanship, juggling, tumbling, acrobatics and other bizarre entertainments. Conventional theatre at home probably began with the formation of the Chapel Royal where aspiring musicians and poets who were taught the basics of dramatic craft that Henry VIIIth loved so much.”

Having been a theatre major myself, I found the part about the theatre at the time to be fascinating.  There is so much that shapes what a playwright writes and the places where the works can be performed definitely affects that as much as the props, actors, and so on.  I’ve read several things about Shakespeare before, but in this particular chapter Kazanthes dives deeper than most articles or books revealing so much more about the time period itself and how theatre as a whole carried on.

Kazanthes does an analysis of each play along with a character list.  It essentially is like having Cliff Notes for each one all together in this book.

Kazantheos contends that the man truly behind Shakespeare’s works was Edward de Vere, the 17th Earl of Oxford.   One of the chapters in this resource book, examines this notion which seems to be the most popular of all the true authorship theories regarding Shakespeare.

“Although the basic factual details of his biography are well known and accepted, it seems on closer inspection that Edward de Vere, the 17th Earl of Oxford, led a mysterious double life. No academic or historian would of course deny that he had a penchant for poetry, drama and historical study and neither that he was a well-connected man with some degree of military experience on the continent. He also had the private education, as well as the noble bearing and had travelled to Italy where a great number of the Shakespeare plays took place.”

It will give you food for thought, depending on who you believed wrote what.  It is certainly interesting.  Having lived directly across the street from the Folger Shakespeare Library in Washington, DC I have often wondered myself about the true origins of his plays and stories.

Another favorite chapter of mine was the one on poetry.  It puts Shakespeare’s sonnets under the microscope so to speak.  It picks apart many lines and verses with interesting tidbits on how and why they exist or if there is something more to the lines than what may seem.

Most fascinating was the chapter on Cryptographic Systems.  So many hidden gems, thoughts, theories, speculation inside these poems and plays.

Kazantheos has had a long and accomplished career working in so many different areas.  This reference book shows what a gift he has himself with the subject of the Bard.

~LB Sedlacek is the author of the poetry collections “I’m No ROBOT,” “Words and Bones,” “Simultaneous Submissions,” “The Adventures of Stick People on Cars,” and “The Poet Next Door.”  Her first poem novel “The Blue Eyed Side” as well as her first short story collection came out last year entitled “Four Thieves of Vinegar & Other Short Stories.”  Her mystery novel “The Glass River” was nominated for the Thomas Wolfe Memorial Literary Award.  She writes poetry reviews for “The Poetry Market Ezine” www.thepoetrymarket.com  You can find out more about her at www.lbsedlacek.com