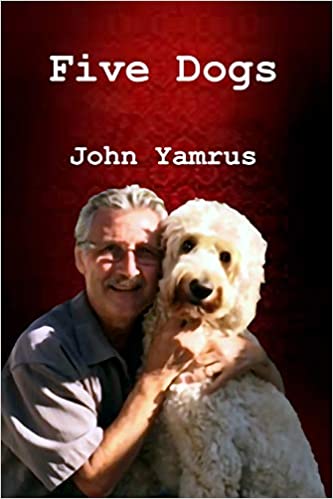 The unforgettable experiences related by John Yamrus in his latest book “Five Dogs” reveals heartfelt and loving emotions. Five Dogs exemplify an incalculable level of affinity between humans and dogs. Scenes are unforgettable if imagined by one and have a great beauty. The memorable events shared by the author which he had experienced with his dogs MIKA, PHOEBE, ITO, ABBY and STELLA are heart-touching and quite heart-warming too. John’s book is divided into seven sections: THE ZOOMIES, MIKA, PHOEBE AND ITO, ABBY, STELLA, OOGIE AND OPRAH. Each section sheds light on the respective origins of the dogs and reveals their cheerful ways, mischievous activities, and the remarkable bond they have with the author and his wife, Kathy.

In THE ZOOMIES, the author writes about zoomies which is what dogs do to release pent up energy and it is a fairly common thing to see. The author writes: “my grandmother, who lived across the street, had a dog. why couldn’t we?”  This line expresses the immense need of the author right from his childhood to have a puppy. The story then fast forwards 30 years or more and here comes Mika (the first dog). John and Kathy move into a new house, with a front porch, a back yard and white picket fence. They go to the Amish family down the road who breed dogs, and where one little dog breaks rank and comes to them out of a pack of puppies. This was their dog, Mika.

After some time, they both go to another Amish breeder but not to the same place. This breeder had an actual formal business going on, with outside runs for the dogs made of chain link fencing and a great big yard. They both planned to have one dog, so Phoebe was the final pick. While there, Kathy holds Phoebe in her arms and from the other side of the yard a clunky awkward little pup lumbers across the grass. He had four brown paws and a brown face and little brown patches above his eyes, comes closer to them and practically smiles. Surprisingly, this one comes even closer and seems to almost smile again, and then promptly falls asleep on the author’s shoes. Undoubtedly, I can say that this moment was the sweetest and most delightful in the whole book. John states, “i turned to the woman and said “how much if we got two?” Wow, so kind and generous of John and Kathy! I am impressed with their decision. So, this was how Phoebe and Ito comes into their life.

The story of Abby (the fourth one) is tragic. I can neither comment on that, nor tell the story, as it is sad and difficult to relate. It is really hard to find words for it. The fifth dog, Stella, the biggest dog they ever had, seems to take the entire room when stretched out in a totally relaxed position.

Oogie’s story is stunning and drastically different from others. At this point in the book, John and Kathy take Phoebe, who is desperately ill, to a clinic outside of Philadelphia. There, the author meets Oogie, a big white dog who is missing an ear and part of its. The author writes the poem titled: “and all the sick, perverted” after coming back from the vet. The poem eventually gets published and becomes popular...so popular that he started getting emails of appreciation. This incident is what makes John think about writing a book of poems only about dogs.The book ends up with a great astonishment which can’t be revealed here as I find it is a cynosure. To be honest I am attached to this book and I feel very sad by saying that the book ends up here.

This remarkable book “Five Dogs” is a beautiful tale of the journey of John and Kathy with their dogs. In such a small book John has described so many events that captivate the reader. “Five Dogs” includes three charming and magnificent poems: my dogs, in dog obedience class…, and all the sick, perverted. I wish that this book could have been longer so that I might read more of the activities of Mika, Phoebe, Ito, Abby and Stella and ultimately imagine them to get a realistic experience of this book. For my part, there is a green light to all the readers that this book is well worth buying.

In a career spanning more than 50 years as a working writer, John Yamrus has published 26 volumes of poetry, 2 novels, 3 volumes of non-fiction, and a children’s book. He has also had more than 2,000 poems published in magazines and anthologies around the world. Selections of his work have been translated into several languages, including Spanish, Swedish, French, Japanese, Italian, Romanian, Albanian, Estonian and Bengali. His poetry is taught in numerous colleges and universities.