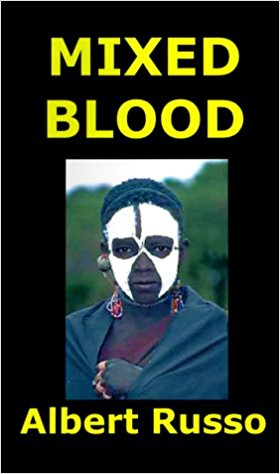 This is a must-read text book, I exclaimed after reading the first pages of this fascinating novel. And the more I read, the more I was convinced, as a former Professor in several universities and a former Director of the Israeli School of Diplomats, that Mixed Blood should be in the hands of students of History, of Africa, of Developing Countries and of Diplomacy.  Any student interested in the history of Africa at the turn of this continent from colonial times to freedom and independence, would greatly benefit from reading this book.

This intense, passionate novel, teaches us so much about Congo-Léopoldville, the present Congo-Kinshasa, also known as Zaire.

I must confess that I had a problem writing this article.  Indeed how do you review a book with whose characters you identify so closely, when turning page after page, you re-live almost identical situations during the period of time the story unravels?  When you feel you were there, even more, that you were the author of the book?

Because this novel is so well written, the images are so vivid and the characters so human and realistic, it brought me back to Africa.  Indeed as Deputy Director of International Cooperation, as Ambassador of Israel in eight different African countries, and as Director of the African Department of our Ministry I was involved with this continent for a period of 18 years.

It all started for me on the 30 June 1960, when Congo-Léopoldville became independent from Belgium.  A few days after the festivities, there were troubles and the UNOC, the United Nations Organization in Congo, an international peace-keeping force, was sent there.  A doctoral student at the Law Faculty in Paris, working for two years on UNEF, the first ever United Nations Emergency Force (in Sinai), I had to spend two more years to include UNOC in my thesis.  How much I needed then a book like Mixed Blood, in order to better understand what was going on in Congo.

My involvement continued with the first official visit of the Congolese President, Kasavubu, to Israel, a few years later bringing with his delegation Justin Bomboko, the only University teacher when Congo became independent (he would have been an évolué in the book). What a gap in my knowledge of Congo would have filled then Mixed Blood!

Reading the short biography of the author, I tried to relate the events described in the book to his own life.  He was born and grew up in the Belgian Congo.  And though this is a novel, set in a specific time frame, with real historical events, but with fictitious characters, the story rings so true that you feel you have met them.

The front cover of the book - a young African boy whose face is painted half white - is itself an invitation to the continent.  You will want to talk with Léo, the young mulatto boy, who is one of the three main characters of the book.  Russo brings to the front stage, at that very delicate moment of transition the Congo is going through, and without using any slogans, people made of flesh and blood, whose particular lives capture your attention, while at the same time they revive so many memories to those who know Africa, as in my personal case.

Russo’s mastery use of words and of situations - most of them atypical, yet so reachable, you immediately feel involved as a reader - draws you into the story, as if you were a neighbor.  You befriend Harry Wilson, the American expatriate whose sexual orientation will be brought to light in a violent manner later in the story, you breathe the same air as his adopted mulatto son, Léo, who feels neither Congolese nor European and as his Congolese surrogate mother, the strong-willed Mama Malkia, the Queen Mother, the daughter of a tribal chief - and though employed in the service of Harry Wilson, she is the one who will take charge of the household.  The three of them are intertwined in a destiny tied to that of the Congo itself, as a colony before, and as a state after Independence, each bringing to the story facets common to all human beings as well as their differences which they will have to tackle each in his and her own way.

We hear with delight words and expressions in Kiswahili, hurled by the forceful and inimitable Mama Malkia, the American accent of Harry Wilson when he speaks in French, and the lilting Belgian intonations of the colonial authority.  All of this brought me nice memories of the three years of my tenure as Ambassador to Sénégal and the many, most interesting encounters with Léopold Sédar Senghor, the then President of Senegal and member of the prestigious Académie Francaise.  Senghor used, both in his poems, writings and speeches, as well as in our conversations, words and expressions in the various local Senegalese tongues, the way Mama Malkia does in the novel, under the pen of Albert Russo.  This is how we come across words such as muntu meupe (white folk), mazimu mingi (real crazy), mtoto (child), nduku (brother or cousin), mubaya (bad or sickness), nyoka (snake), and the much loved Kitoko Léo (beautiful Léo).

At one point, irritated by her patron (boss), Maka Malkia says to him: “Take it or leave it, Monsieur!” then she mumbles: “All these whites, they want to teach us their civilization, Ha!” Not only is she the dominant character of the book, but she is the spirit and soul of Africa.

We accompany Léo to Montessori, the kindergarten led by the Sisters, then to the Collège Saint-Francois, the all-boys Catholic school, where he misses the Sisters.  We follow him as he grows up, torn between his two identities, yet showered with the love of Harry and Mama Malkia, and finally as he leaves for the United States, the country of his adoptive father, where he will go to university.

We shall also witness the cruelty of fate, when, after Independence, Harry gets killed by the UNOC soldiers, those who came to ensure the peace, as he goes to the pharmacy to fetch medicine for Mama Malkia.

Those three predominant characters, portrayed by Russo with so much literary talent, do not overshadow the minor ones that form the tapestry of the novel.  Some are marginal, but all of them have their distinctive personalities and quirks, yet being at the same time so typical of the white communities who had settled in colonial Africa, whether under Belgian, British, French or Portuguese rule.

We come to know Monsieur Giorgios, the Greek owner of Elisabethville’s finest pastry shop and ice-cream parlor, Eric van Pool, the bland Commissaire, Monsieur Rombout, the teacher who tries to convert every non-Christian pupil to Catholicism, Father Vandamme, the feared but equitable religious figure, Ishaya Ben Aharon, the Jewish Sephardic boy and his close-knitted Jewish community, Madame Ben Aharon, his mother who bakes such scrumptious rechicas and speaks ladino, Piet, the red-haired Flemish boy, who, because he only speaks the local Kiswahili language is called, in a derogatory fashion, the white Congolese.

In the oeuvre magistrale which is Mixed Blood, Albert Russo invites us to a long, variegated and human journey back to Africa.

After I finished the book, I went back to its opening pages where I found again Léo’s happy- end.  Perusing the novel again, I was reminded of my African beginnings, and of my long, rich periods of life and work in so many African countries.  Turning page after page of this novel was for me like a journey in memory lane. Had Mixed Blood been written earlier, I would have recommended it to my students, making it a compulsory reading. Let me say it again: this book is a must-read Text Book for students, researchers, historians, diplomats!

MIXED BLOOD was reissued in the author’s own French version under the title SANG MELE, published by Ginkgo Editeur, Paris, in 2007, and is due out in Italian with Coniglio Editore in the Summer of 2008 b) - The author’s literary website: www.albertrusso.com