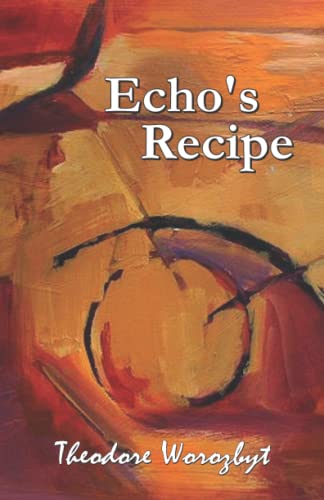 Opening “Echo’s Recipe” is similar to perusing a new menu at a new restaurant. The author has cleverly organized his poems into a sort of supper club or possibly dinner club menu.

Opening “Echo’s Recipe” is similar to perusing a new menu at a new restaurant.  The author has cleverly organized his poems into a sort of supper club or possibly dinner club menu.  At least, that’s what it reminds me of.  Headings such as “The World of Onions,” “Missing Ingredients,” and “The Carvery” give his book just such hint of curious flavor.  The way poems are placed in a poetry book or chapbook can and do make a difference to the overall feel and theme(s).  It’s such a treat when the author has taken such care with what may seem like a trivial part of one’s book.

Now to the poems!  Many of them have been previously published and the author notes perhaps in a different form.  The poems are prose entries of a variety of subjects, many of them, but not all, related in some sort of way to food and/or a dining experience, or the collecting of ingredients to use in recipes such as blackberries.

He cleverly includes what reads like a recipe in the poem “Reduction.”  In “Basil” he talks of much besides the herb, things like boys coming of age, the deep blue sky, and olives.

From the poem “Objectless Fragments”:
“I bent coins with my teeth, and they broke. That’s what currency can’t reconcile, green stacks and time, its escapements, the gleaming plates, the missing letter. A bicycle comes down from the attic in time but in time for what? Love spun in the mouth? The set-up, the derailleur oil, the grandmar legged in the crystal snifter, the sea pulled along like blue
ribbons at the grips? Forgive my objectless fragments. I’m a fraud. Joints crack and burn, swifts sweeping every day into new chimney aches, a flea in the ear, a moon in a tree, a molten spot hidden under black fur, the light gold disc thrown too far toward the curve in the road.”

Worozbyt is tuned in to language, feelings and much more.  His words may seem delicate but there’s much more there leading to a thought provoking conclusion.  His poems resonate and seem to assemble the visuals he’s trying to create.

What the reader takes away from this book, could be different for each one.  Fresh writing, such as this, helps to keep poetry alive!

His style is creative.  He uses crisp language that maintains the reader’s attention.  He is able to show any struggles or accomplishments in each poem almost like a tale or story.  This makes for satisfying poetry.

His prose poems are gripping and intense, but also have a touch of fragility to some of them, maybe even a curiosity of sorts.  This poetry book is absorbing – you will want to finish reading it in one sitting.