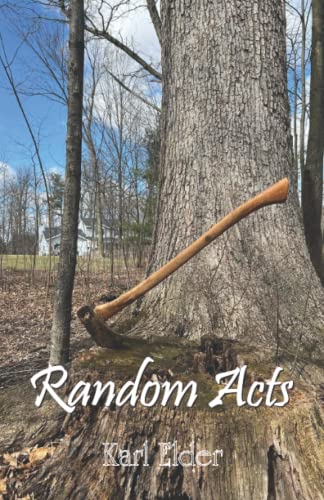 Elder’s group of poems is a collection of mostly prose and free verse selections.  He has found his muse in this new book.

Poems cover a variety of subjects such as guitar picks, lab experiments, dreams, silence, notebooks, and a beer for breakfast.  He writes with certainty.  Each poem seems to unveil its purpose slowly and precisely.

His voice is visible and illuminated within his words.  He is able to mold and tweak them into just the right verses that complete each poem as a whole.

To write good poems, one has to be able to guide many parts in order to achieve a wholeness worthy of the poem itself.  Elder is persistent with his art of poetry.

From the poem “A Beer for Breakfast”
“I drape
the black velvet of regret
over reflection.
It is impossible
to imagine the joy
which was once mine.
The shores of the brain
are littered with the dead
and wounded.
The rivers coagulate.
I want out of here.”

Elder takes the reader to the edge and back again.  His visuals are sharp and fluid.    He is not afraid to make his own rules with his poems.

Elder’s poems are contemplative as well as compelling.  His word choices are sophisticated and meet the challenges of putting a poem together.

The poems, many of which are previously published, are uncollected but placed together so that the transition from one to the other works well.  The book beckons for attentive reading.

From the poem “Enigma”
“A language with one word.
The word scrawled so small in an antiquarian book
that to read it with your best pair of glasses
is to stand immediately below letters
like the tallest buildings
to derive no comprehension of their true magnitude
to accompany the crick in your neck.”

Elder does not settle with these poems.  Each one is crafted superbly with a singular voice.  This is a book of poetry for poets and poetry readers alike.

~LB Sedlacek’s latest poetry book is “Ghost Policy.”  She is also the author of the poetry collections “Dead Men Don’t Know Jack,” “This Space Available,” “I’m No ROBOT,” “Simultaneous Submissions,” “Swim,” “Words and Bones,” and “The Poet Next Door.”  Her non-fiction books include “The Poet Protection Plan,” “The Traveling Postcard,” “Bridge Ices Before Road,” and “Electric Melt.”  Her short story collections are entitled “Four Thieves of Vinegar & Other Short Stories” and “The Jackalope Committee and Other Tales.”  www.lbsedlacek.com

A Guide to Getting Lost —by Jeremy Springsteed