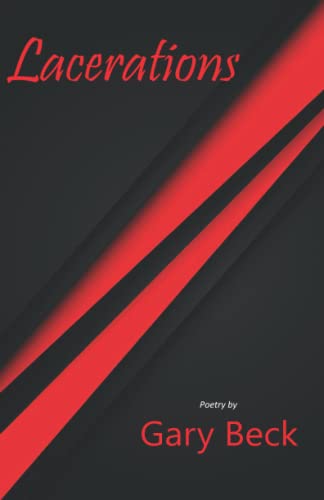 Lacerations ultimately serves as a warning for readers but closes on a note of possibility.

“…and I can only wonder/if someone watched/in ancient Rome/as the barbarian tide/engulfed the empire.” Prolific New York author Gary Beck’s somber closing to his poem “Last Glance” in his most recent volume of prose poetry Lacerations sums up what this book is about: the decline of the exceptional American empire. The nation’s economic, infrastructural and moral decline is examined in its long-reaching effects on everyday life, experiences and observations from the recurring location of Bryant Park in New York City through the annual cycle of seasons. Traversing this book gives the reader a sober warning that if deep changes are not made, the United States of America is headed towards a truly unsustainable future that will involve much suffering.

The book unfolds with a series of poems describing the decline of the nation, punctuated in between with supporting poems examining the concerning phenomena of a lagging economy, homelessness including of children, climate change, a staggering wealth gap, unethical corporations, inequity in healthcare, and the overall theme of human suffering in what ought to be the best land in the world. The gist of the poem is demonstrated in “Dangerous Time”: “I used to fear/ that incrementally/ democracy was ebbing away./Now it’s rushing away…” The narrator’s intuition that American democracy is not what it purports to be is proven true, and the rest of the poems in Lacerations demonstrate this observation.

However, despite the deeply sobering picture that the book paints, it closes on a faint note of hope. In “A Mighty Oath,” Beck writes, “…until things get worse/we’re still better than most.” America’s true exceptionalism shines forth in this faint but still pulsing closing line, for even in a state of undeniable decline, the nation’s exceptional economy, infrastructure and morality is still greater than most other nations. It can only be the reader’s hope that this small ray of hope is grabbed onto and compounded to create a more sustainable future for a still promising nation. Lacerations ultimately serves as a warning for readers but closes on a note of possibility.