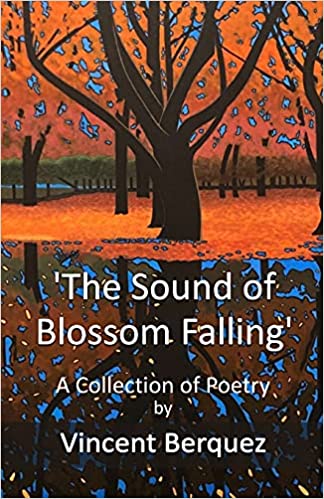 “The Sound of Blossom Falling”

A Collection of Poetry

Berquez cleverly divides this new poetry collection into three sections:  Me, Us, and Them.  That alone makes a powerful statement.

He definitely delivers opening his book with this poem “A walk on Hilly Fields with my dog, Kenny” which is about a young child watching his dog be attacked and what he does to try and save it.  It’s easy to imagine being there with this young boy, and also wanting to reach out and help him when the owner of the attacking dog does nothing.  It’s clever to tell a story within a poem.

The next poem is another welcome jolt to the senses:  “Being Voltaire out of age.”  Some lines from the poem “I have come too far from my time of penned curves and waves, / powdered and pampered amid the squalor and poverty of plagues.”  What would it have been like to live and breathe in that age?

His poems seem to meld from one subject to another such as caring for a mother with dementia and punk revolution.  It takes skill to transition like this.

From the poem “My Punk revolution”:  “It was another raw birthday and I wanted to / escape my life of stupid ignorance and experience / so with the money I was reluctantly given / I went out and bought too-expensive Punk clothes.”  This is a coming of age poem that will make you think twice about whatever you may have liked or not liked about punk music.

The Us section brings people together:  couples, friends, etc.  From the poem:  “As good friends do”:  We need to get closer to each other, to communicate, / in the sinew of anticipation, the normality of enthusiasm.”  It expresses the need for human contact, especially now.

The Them section seems to bring observational poems to light.  From the poem:  “A violin called ‘Hope’”:  there stands a man poised in a miracle / within small spaces of time, in a deep tempo, / the craftsman takes wood from nature for in his vision stems / a sound and gives birth slowly to the instrument within his sight.”  Violin music can be quite beautiful.  In this poem, it’s more, it’s life giving, it’s love and magic, and it’s also the beginning of all music.  Quite a feat to wrap that all into one soothing and thoughtful poem.

The poem I enjoyed the most was “The new notebook.”  As a poet and writer, I’m old fashioned and still write poems in journals or notebooks as well as on my computer or phone.  I’m not alone in that as I recently read an article all about well-known authors and poets and their journals which they use for writing, doodling, why all sorts of things.  I don’t usually keep my journals after I type up whatever I’ve written, but sometimes I do.

From the poem, “The new notebook”:

“A new page whispers for a voice,

a new notebook on my ready lips

take my virgin plains and describe

your point, take the pen and water

your virtues, shimmer the language

to the groove that indents

and let your voice flow all over me.”

This poem perfectly captures the excitement of opening and starting to write in a new notebook.  It puts into verse what I imagine a lot of writers feel when they begin to work on something new.  There is something special about pen or pencil and paper – a whole new way of doing things rather than on a screen of some sort.

Berquez is an accomplished poet and artist.  He has an interesting background in poetry with a production of a song-cycle of seven of his poems recorded at the Royal College of Music as well as a poetry film shown at a Polish/British festival in London.  His poems reflect his highly original creative way of life.

~LB Sedlacek is the author of the poetry collections “I’m No ROBOT,” “This Space Available,” “Words and Bones,” “The Blue Eyed Side,” “Simultaneous Submissions,” “Swim,” and “The Poet Next Door.”  Her non-fiction books include “The Poet Protection Plan” and “Electric Melt:  How to Write, Publish, Read Walt Whitman and Survive as a Writer and Poet).  Her short story collection is entitled “Four Thieves of Vinegar & Other Short Stories.”  She writes poetry reviews for  www.thepoetrymarket.com  You can find out more:  www.lbsedlacek.com