Because the Sun by Sarah Burgoyne 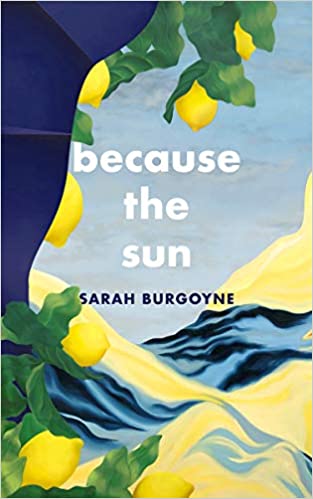 Because the Sun by Sarah Burgoyne

Poems in Because the Sun by Sarah Burgoyne takes inspiration from Albert Camus’, the second-youngest noble prize recipient in history, various renowned works. The sublimity entailed in the collection in a certain loftiness and seamless language represents a gifted writer, who is endowed with the affability of soul, can create sublime effects.

Poems in Because the Sun by Sarah Burgoyne takes inspiration from Albert Camus’, the second-youngest noble prize recipient in history, various renowned works. The sublimity entailed in the collection in a certain loftiness and seamless language represents a gifted writer, who is endowed with the affability of soul, can create sublime effects. The book comprises different sections named ‘one, the sun’, ‘two, the sky’, ‘three, women’, ‘four, flowers’ each reflecting light on a particular inspiration or is inspired from a great event. As I see, “The italicized lines in three, women are either direct quotes or adaptations of lines from Sara Ahmed's seminal work The Cultural Politics of Emotion”.

In 'four, flowers', ‘Jackpot’ is inspired by the Oulipo game n+7, in which the writer takes a poem already in existence and substitutes each of the poem's substantive nouns with the noun appearing seven nouns away in the dictionary. Seems quite unique and a bit confusing, although eye-catching.

“i’ve never been to jackpot nevada but i intend to go. panting. i

and it bothers me. can’t live in a world without men but that’s

In THE WHOLE TIME, THE SUN, the speaker expresses the intense heat of the sun through the following lines:

“It was this burning, which I couldn’t stand anymore, that

made me move forward.

trickling into our mouths”.

One could see the soaring mercury and feel the heat concealed in Sarah’s writings. Sarah’s style of writing is quite unique and a bit complex. No doubt the poet is much influenced by Albert Camus as I see the repetitive derivations of him throughout the book. In three, women the poet composes poetry connecting Thelma & Louise, an outlaw film written by Callie Khouri. It’s a great start for Sarah as an experiment this book will reach an above average benchmark. It would be wonderful if we could see a simplified poetic collection from Sara in the future entwined with her distinctive style and the crispiness in her language.

Sarah Burgoyne is an experimental poet. Her second collection, Because the Sun, which thinks with and against Camus’ extensive notebooks and the iconic outlaw film Thelma & Louise, was published with Coach House Books in April 2021. Her first collection Saint Twin (Mansfield: 2016) was a finalist for the A.M. Klein Prize in Poetry (2016), awarded a prize from l'Académie de la vie littéraire (2017) and shortlisted for a Canadian ReLit Award. Other works have appeared in journals across Canada and the U.S., have been featured in scores by American composer J.P. Merz and have appeared with or alongside the visual art of Susanna Barlow, Jamie Macaulay and Joani Tremblay. She currently lives and writes in Montreal.