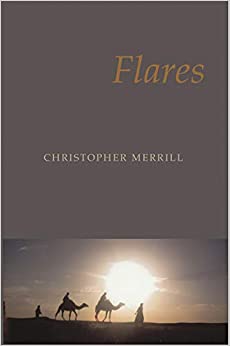 Written by Christopher Merrill, Flares is a poetic collection comprising poems of diverse elegances, unforgettable experiences of the poet and events encountered in several places of Middle East Asia entailed with vivid imagination and insights.

Written by Christopher Merrill, Flares is a poetic collection comprising poems of diverse elegances, unforgettable experiences of the poet and events encountered in several places of Middle East Asia entailed with vivid imagination and insights. Lodge After, Visiting the Gorky Institute, Excavation, The Stage and The Festival, outstandingly tuned prose poems, showcase various details about the different countries and depict the poet’s gallivanting nature.

The book opens up with a sharp-witted poem In Petra which includes quite magnificent elements of the great Arabian city. Stating about the Bedouins, Treasury of Petra and djinn blocks is quite remarkable and gives the true vibes of the place to the reader.

I did not hear the Bedouin singing in the cave. Nor did I see the camel gallop

off with a Canadian woman who had traveled here to track down her daughter.

In Lodge, the poet shares an event of Jammu and Kashmir when “There was no record of our reservation at the hunting lodge.” He has described the interior of the lobby at the hunting lodge quite precisely. Moreover, the clerk who was a retired barrister and the oldest member of the Bataan Death March have influenced the poet much with their way of exploring woods as a writer and at the end the poet remarks, “How to explain the fever that came over me for you? All I know is that it never broke.”

There was no record of our reservation at the hunting lodge, according to the

clerk, who somehow managed to find enough rooms to salvage the symposium

on nature writing. He was a retired barrister from Jammu and Kashmir, the

division of which marked his life, casting light on his offhand manner of

identifying the stuffed animals displayed in the lobby—moose and caribou,

a tiger, a zebra, a wildebeest.

If one has gone through the content the one might not be able to refrain from coming to Flare by skipping the pages as the poem carries the same name as the title of the book. In Flare the poet has stated a sad story of a man whose herd had been reduced by half and was in search of a job in the refinery. There were two conditions for the employment one to undergo weekly blood tests and “the other to ignore the orders of any engineer who did not kneel before the falconer”.

The rent was late, and nobody thought to dig up the sacks of gold buried

under the black flags lining the road through the desert. At dusk a gas flare

season; his herd had been reduced by half, and if he believed the oasis was

no longer within walking distance he said nothing to his son, who was planning

his escape, not to the city but to the refinery at the edge of the sea.

This pulsating and intelligent poetic collection expresses the story of the poet's different perceptive experiences and excels in achieving communicable expression of Christopher’s imaginative inspiration. The verse stresses the quotidian virtues of all persons, places, or things in the various set of circumstances embellished with each kind of artistic adornment. I wish this book may reach to the most of the bibliophile and gets deserving appreciation. All the best Christopher!