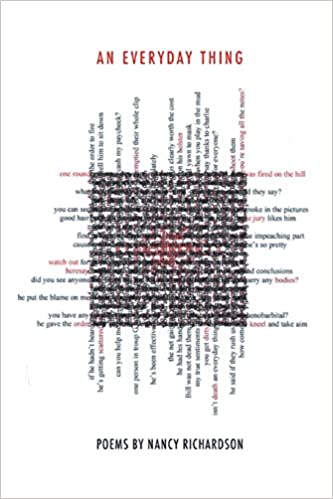 Nancy’s writings bring her signature sharp, perceptive, splendiferous language to this poetic collection which relates a great part with shootings of Kent State and other associated themes.

In Kent State Trial, 1975 the art of poetry brings out the social point of view and the poetic style obliquely remarks the repulsive human behavior and culture during the 1970s. “The photos speak for themselves,” states that the photos are so shattering that discussion on its details might not seem appropriate and can deteriorate the decorum of the court. However, including such tragedies makes poetry a higher art and stimulates the purgation of emotions.

“The photos speak for themselves,” said the Judge

to the students’ lawyers. The jury puzzled over them,

but the photos lost their nerve. In this one the Governor

would shout, “worse than the brownshirts

and the communists, night riders and the vigilantes.”

Or another, blue sky, clouds, a clot of guardsmen

huddled in the field, perhaps a picnic on a spring day

in May. If the photo had bothered to listen it might

have overheard their plans to turn in unison and fire.

Fear brings out the ghastly horror and can give serious goosebumps to the reader if read in silence and with a complete feel. Each line of the poem is unequivocally stellar and entrances the reader with the poet’s bewildering insights.

The air is thick with strobe lights and sweat.

On stage Jefferson Airplane sings for the four dead

and the nine wounded. Gracie Slick in a voice

like a dirt road, we are outlaws in the eyes of America

tear down the walls. Behind her on the screen

in blue staccato lights. Somewhere a door lets in a gust

of fear. Tear down the walls won’t you try?

In An Everyday Thing each line overwhelms the reader by a succinct and simmers up the ardor as the book goes on. The inclusion of certain tragedies in the poetic collection is an artistic imitation of historical facts. The language embellished with each kind of artistic ornament through pity fear, horror affects the interpretations done by the brain while the verse seems so touching to the heart that it cannot be expressed in words by one.

one round was fired on the hill.

what did they say?

you can see smoke in the pictures.

good hair, the jury likes him.

cause she’s so pretty.

Directiveness, restraints, austerity and high seriousness in Nancy Richardson’s style of writing is quite noteworthy and brings her ideal of poetic art to a high level enunciating the classical philosophies of artistic beauty. Youngstown Ohio 1952, Myopia, Returning to Kent State and Randomness reflects intense light upon the shooting and trials of Kent State and the remarkable historical events of Ohio. However, most of the poems grab the theme from Kent State and Ohio each depicting a different perspective and context.

I highly recommend An Everyday Thing a wonderful collection by Nancy Richardson to all the readers. Read on!

Nancy Richardson’s poems concern coming of age in the rust-belt of Ohio during a period of decay of the physical and political structures that made the region once solid and predictable. The poems chart the shifting of the foundations upon which a life is built and the unpredictability of events that have profound personal and political consequences.Her poems have appeared in journals and anthologies and her first chapbooks, Unwelcomed Guest and The Fire’s Edge, focus on the events that occurred in the rust-belt of Ohio from the late 1970s onward. Her poetry book, An Everyday Thing, expands the narrative of that time and place, and concerns the effects of the period’s dislocation years afterward. That book received a Kirkus Star and was named one of the Best 100 Indie Books of 2018 in all genres.The poems in her new book, Going Home, have been selected from those in these previous volumes and combined with recent poems in a memoir that testifies to the poet’s life working for justice in education and government. Nancy lives and works in Vermont. She has an M.F.A in Writing from Vermont College of Fine Arts, an M.P.A. in Public Management from Harvard University, and a Ph.D. in Education from Kent State University.