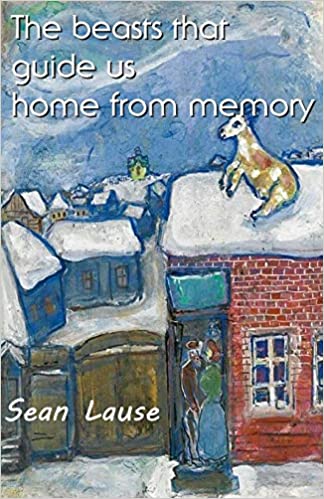 Sean Lause is a professor of English at Rhodes State College with widely published poems and several Pushacart Prize nominations. With the poems in this collection, it’s easy to see why is work is so well accepted.

“The Beasts that Guide Us Home From  Memory”

Sean Lause is a professor of English at Rhodes State College with widely published poems and several Pushacart Prize nominations.  With the poems in this collection, it’s easy to see why is work is so well accepted.

The first line in the first poem (“January 6th, 2021”) of his book is:  “I watch the chaos shimmer / from my television / like Martian cancer.  You know with this start, he has something to say.  And that’s the best kind of poetry where there’s meaning behind the verses.

From the poem “The Others”:

“A cat approached me

with a note on her paw

That was sound advice,

made more sense than my “philosophy,”

yet still I craved for more.”

Where you think the poem may go in “The Others” it definitely doesn’t!  Two more of the lines further in the poem is:  ““I weave death from sunlight, / and I am the silence the grass keeps.”  Poems that take a different turn than you the reader expects are welcome.  This is not greeting card variety poetry.

Lause’s lines are realistic and laced with more than a few unexpected twists.  You will feel like you are right there in the Captain D’s or walking the streets experiencing these images as they come together with a bang in the middle, the end, or somewhere in-between.  Suspenseful, entertaining and real poems are what you will find inside this new poetry book.

The poems have beautiful lines with a nonstop momentum which adds dimension to each verse.  If you’re looking for some perfection in poetry, this is it.

From the poem “Kindred Spider”:

These poems lead readers into a tantalizing and powerful poems.  Fun, and high quality you will connect with these verses.

From the poem “Deer-haunted through the Alice woods”:

Deer-haunted through the Alice woods,

secrets from a magical mirror

tell a fawn’s reprieve from fear,

and the end of Summer’s dreams.

Lause proves he’s willing to take on a variety of subjects from nature to stories to cow tipping.  He writes in a wide range of style including haikus contained in this collection.

In “Coyote Vision” he follows the path of one of these howling creatures.  In “My final Halloween” he talks of unmasking the monster.  These poems will coax you into a thundering motion.

It’s refreshing to read poems that contain an originality to them.  The way Lause writes adds dimension to each verse.

My favorite poem in his collection is “The secret dinosaurs” where the narrator tries to save them by hiding them in the basement.  If only!  Here are some lines from the poem:  “That left the huge, unholy monstrosities / trapped in time like aging poets, / susceptible to blood and meteors / yet determined to endure till the end.”

The last poem which is the title poem bids you to “watch gently from the nearing stars” (in the poem the word “watched” is used instead of “watch”).  You will open this book expecting gentle poetry and while some of the lines are such these poems are an unveiling of dimensions and ones you’ll have fun reading!