As Light into Water by Piet Nieuwland 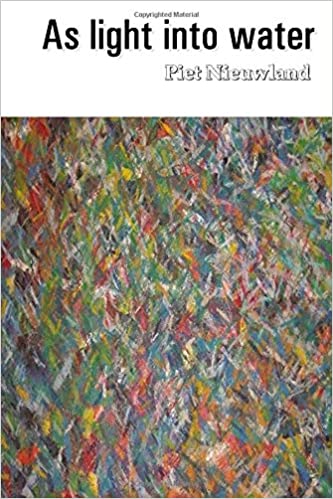 As Light into Water by Piet Nieuwland

A native of New Zealand, Nieuwland has built an international record of publication of poetry, appearing in numerous journals and anthologies. This collection shows his nationality as numerous poems reference Maori words.

A native of New Zealand, Nieuwland has built an international record of publication of poetry, appearing in numerous journals and anthologies. This collection shows his nationality as numerous poems reference Maori words.

Through many of his (free verse) poems, Nieuwland shows a deep affinity with nature, writing with confidence and a literary awareness which is for the most part sophisticated and supple. Many poems use strong language to create vignettes as the poet observes his environment, as in for instance, ‘Extra Seconds’:

ninety million waves to the bay’.

The poet deploys close observation to varying degrees of success across poems that scrutinise domestic tension (as in ‘In the Clatter of Family’), landscape (‘At Sagaing’), and, frequently, nature (‘Extra Seconds’). Some poems work better than others. One successful poem is ‘In the shallows, small things’ which begins:

A jungle tribe, whom I cannot speak for,

Bury their taboos and totems in river silt.’

At times, a poem addresses an unknown ‘you’ as in ‘Avenues’ which begins with ‘your mind wanders beyond logic’ and continues to reveal a collection of places and objects (‘vectoral threads tied by magnets’) and finishes with ‘in a democratic forest/taking the long view/where the future is a verb’ which begs the question is the ‘you’, the poet or a third person? In numerous poems puzzles like this exist to perplex the reader, so often the poems need multiple readings to determine meaning.

In numerous poems, we find how the poet withdraws from inner experience to concentrate on the outer. This is evident in ‘Without name or history’ which begins with ‘These are small things that surround me with happiness’ and proceeds to describe the elements – sky, wind, night, sea – concluding with:

Phrases among the poems which appeal are: ‘I am cloaked with hurricane’, ‘the solitude of storm’, ‘faint as nocturnal mist’ and ‘the compass of glittering stars.’

Numerous poems have titles which are incomprehensible (such as ‘Kahukura’, Te Hau o te Whenua’ and ‘Scriptio continua’). Nieuwland often uses words which could be simplified to aid the reader (such as ‘anthropocentric’, ‘neutrinos’, ‘delectation’, and ‘votaries’). No doubt the reading of this poetry collection would be made easier if one were a New Zealander and highly literate.

To sum up: there is much to commend this collection, but overall, the poems could be more accessible if they were less concerned with lists and more use was made of punctuation and simplified language.