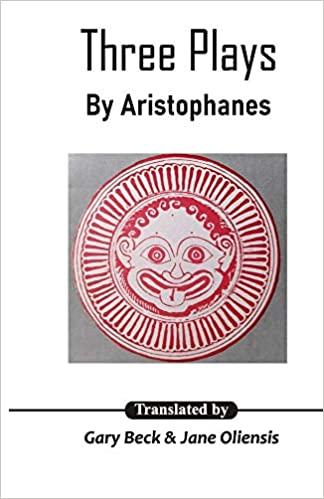 In Aristophanes, Beck and Oliensis bring creativity and wit to three of the Ancient Greek playwright’s comedies. The book comprises three plays: The Women in Assembly, The Birds, and Lysistrata.

(As directed by Gary Beck)

In Aristophanes, Beck and Oliensis bring creativity and wit to three of the Ancient Greek playwright’s comedies. The book comprises three plays: The Women in Assembly, The Birds, and Lysistrata. Their translations animate the political satire and antics laden plots characteristic of his writing. And while reading these, it’s easy to picture and feel life in the polis. While the plots have a heavy dose of absurdity (in a good way), that absurdity serves to enlighten the audience and criticize the powers that be about war, political events, and everyday Athens.

The first play, The Women in Assembly, follows Praxagora on her scheme to put women in charge of the Athenian government. Beck and Oliensis capture the reforms she wants instituted. As the play unfolds, readers and audiences are immersed in how Athenian government works and the roles of women and men in society (and how changes to it could change life in Athens). There is a tangible energy that shines through.

In The Birds, the second play translation, Pisthetaerus and his friend, Euelpides set out to find the former Thracian King Tereus who’d transformed into Epops, a hoopoe bird and King of the Birds. Having become frustrated with Athens, they wanted wisdom and guidance about where to go to begin life anew. The events and exchanges leading to their meeting him are very funny, and the two men come up with the idea that the birds should create their own city in the sky because it is they (the birds) and not the Olympic Gods who are divine.

The play continues as a farcical and captivating story that is enjoyable until the end. The Chorus, typical to Old Comedy structure, elevates the play. This translation does justice to Aristophanes and his gift with satire, and the pictures of the bird costumes they include after the script add to it.

In the last play, Beck and Oliensis translate Lysistrata. With the goal of saving Greece by ending war (the Peloponnesian War), Lysistrata convinces women in Athens and in other city-states, including Sparta, to join together and refuse sex to all men until they stop fighting. The play goes on to show what happens after the women agree. This play, anti-war and rich with satire, brings sharp humor and undertones of seriousness. However, the sexual content is pervasive throughout, so performing the play may be a bit more challenging than the first two.

Readers and no doubt audiences to a staged production, should enjoy these lively and funny plays. Aristophanes is a collection of quality translations that bring to life the Ancient Greek playwright’s wonderful works of classic comedy.