Simona: A Celebration of the SPCA By Chad Norman 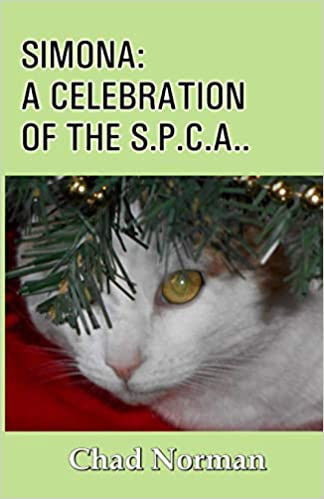 Simona: A Celebration of the SPCA By Chad Norman

This book of poems is a themed one dedicated to the rescuing of a cat named, Simona. While living in Truro, Norman and his family chose to add a pet to their lives. As many rescued pets are apt to do, the cat chose them as her new mates. The cat in turn became Norman’s muse.

“Simona:  A Celebration of the SPCA”

This book of poems is a themed one dedicated to the rescuing of a cat named, Simona.  While living in Truro, Norman and his family chose to add a pet to their lives.  As many rescued pets are apt to do, the cat chose them as her new mates.  The cat in turn became Norman’s muse.

Muses?  Remember those?  Ah, I bet you have a muse of sorts in your own writing life.

Norman infuses the poems in this collection with storytelling type poems about how Simona came to live with them.  Simona is a Calico cat.

Each poem tells a bit about the cat’s life, or the poem is inspired by the cat.  Pets have been inspiring humans (while serving as their companions) it seems forever and this is an enjoyable take on that.

The poems are often written from Simona’s point of view.  They are clever and fun to read!

From the poem “The Rapport”:

An ease in knowing

the language in the placement,

how the human hand

How easy it is to imagine such a relationship with one’s pet.  Don’t have a pet?  You may want one after you read these sweet poems.

Norman adopted the cat from an SPCA shelter.  He found the cat after she had been traumatized by violent kicks from a human.

From the poem “Something about a Visit to the SPCA”:

“a Being who cares

enough to agree on a choice, to choose

to be a family ready to rescue a cat, a pet,

a reason to be a family hoping to enlarge,

hoping to be a family ready to say a pet

can enlarge us, can be the reason to rescue,

can be what the family requires to hope”

It is very involving to detail real life events into a poem.  Each one of these is riveting.  The emotion behind Norman’s cat’s adoption is so real.  He achieves a victory with not only sharing his story and the cat’s story but also on the basis of turning the story into poetry.  He wields his words in just the exact right way.

At times the poems are unsettling, but they are also intelligent and involving.  How could you not empathize with this cat?  How could you not be dreaming of a muse of your own to inspire your poetry writing after reading this book of poems?

This might be a book of love poetry between cat and humans, but it is utterly compelling.  These are most definitely poems for fans of pets!