THE LAMPS OF HISTORY BY MICHAEL SANDLER 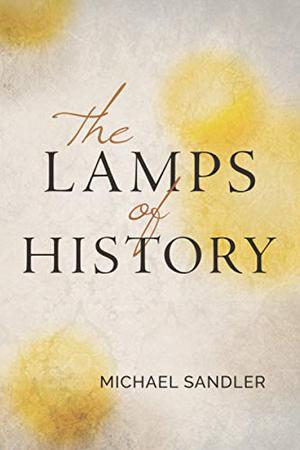 THE LAMPS OF HISTORY BY MICHAEL SANDLER

Michael has maneuvered the level of intricacy and profundity in his poems from starting to the end dexterously. Poems in The Lamps of History exemplify that poet is a logophile and is adept with a prodigious lexicon. Subtle illusions and insights are phenomenal throughout the book.

Michael has maneuvered the level of intricacy and profundity in his poems from starting to the end dexterously. Poems in The Lamps of History exemplify that poet is a logophile and is adept with a prodigious lexicon. Subtle illusions and insights are phenomenal throughout the book.

In Gauze, a ray of light splits gurney and IV bags, and “the lamps of history go out for guests lost in these cobweb shrouds”. “Symbols, voices washing through gates” seems like a personified imagination written contemplatively. The poet never lacks behind in astonishing the reader by his ecstatic visions, “a guise of things through pale gauze, /scanning the waters for clustered flickerings / of remembrance like archipelagos.” What a pleasure it would be if one could imagine beautiful archipelagos after reading this! However, connecting it with Homer adds a historical touch to the poem and defines the so-called title of the book.

In Lamp, the poet signifies the virtue of amber which helps him to dull the anguish to view the past in his own discovered way. The words denoted in the poem are cavernous and perplex the reader thereby mesmerize them too.

In Acer Saccharum a lofty tree ready to turn guards, Northerly Park. The poet makes an apt comparison here “Splashes of leaves yellowing/ at the edge, yet essentially green within” same as we humans say “who doesn’t, shambling through duff, believe/ they weren’t that different at 25.” Acer Saccharum is quite close to reality and rested on gospels.

Lighthousing depicts the most darkened and alluring scene in the whole book. The very opening line of the poem is quite true and convincing “Isolation arrests a point of view.” A keep on an unseen ship in a clotted night is in search of light seems like they have lost the way. The mariner looks into his charts by his spyglass and pours a coffee from his flask. The thing which will wonder the reader is “how did they negotiate the salt-sleeted air”.

Reading The Lamps of History by Michael Sandler was extremely delightful. Michael does not let down, and he does – in fact – both deliver substance and an unabashed and overwhelming display of consistency in terms of admirable intuition and craftsmanship. I can surely give a green signal to the potential readers that this book is worth buying. Read on!

Michael Sandler is the author of The Lamps of History, a poetry collection that explores connections between personal and historical experience while wrestling with the ambiguities (and choices) between connection/estrangement and faith/doubt. For much of his adulthood, Michael wrote poems for the desk drawer, while working as a lawyer and later as an arbitrator. He began to publish in 2009. Since then, his poems have appeared in scores of literary journals including Arts & Letters, Valparaiso Poetry Review, and Zone 3. He lives in the Seattle area. To learn more about Michael and his work, please go to sandlerpoetry.com.