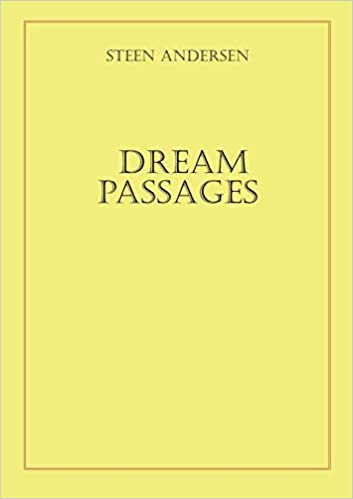 Steen’s Dream Passages leaves behind a vivid description of nature, home, beach, window and garden. The poems include impressions of common household items which adds more simplicity and relatability to the reading.

Steen’s Dream Passages leaves behind a vivid description of nature, home, beach, window and garden. The poems include impressions of common household items which adds more simplicity and relatability to the reading. Uniformity in the writings of Steen is quite magnificent and looks impressive on the first read. Although, the theme of some of the poems seems to be allied to one another which makes a completely peculiar read. Nature plays a prodigious role as the theme of most of the poems in the book and the inclusion of tiniest details of the imaginations have been the stellar virtue of the poems. The philosophical glimpses make the poems prototypical and are truly evident.

The poems have not been aptly marked with a suitable title that looks astonishing at a first glance but after a while, it seems flawless. In the opening poem 1, Steen sets out a scene of a mysterious town where something shocking has happened and the residents are in a search of the killer. Furthermore, personified thoughts have been aptly stated which are quite notable. In 2, a town having gables with clocks showing different times, the poet syncs his cell phone with them. The poet is unable to figure out what all the strangers are up to so he commented, “their words are darkness instead of flowers”. Moreover, the next town situated on a riverbank has been muddy and abandoned for decades. The sailors have been the only visitors of such a town who head for new trips.

Treatment of time as a glade joined with the sky at night and the line between wood and wish as a puzzled path with sharp protruding angles. It looks wonderful! In 14, a great contrast has been set out in the initial by Steen. “somewhere there must be points and crossings”, a gospel truth. “all the others board the train and I’m left on the platform”, signifies a drastic change in the mood of the poet. It seems so he wants to travel to somewhere untold and unknown to him. The scene of the platform and the never-ending tracks could be imagined and feels soothing. 27 may get into one’s bones and sinews and stay there for an eternity.

This is a book that is perhaps best read in small portions, savouring each poem one at a time instead of quickly guzzling down the entire book in one rigorous reading. All the best Steen!

Steen Andersen was born in 1946. He holds an MA in English and Danish from the University of Copenhagen and was a senior master at Køge Sixth Form College until his retirement in 2017. His publications include thirteen books of poetry in Danish and a monograph on the Danish-Norwegian writer Aksel Sandemose. His first book in English was Time's Intervals (2016).