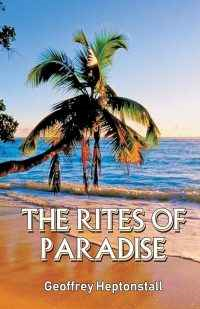 Geoffrey Heptonstall’s ‘Rites of Passage’ is split into three sections, ‘The Bird of Paradise’, ‘Oceans and Islands’ and ‘More Songs for Her’. The first has a focus on reading and music, gateways to paradise perhaps. The second focuses on the sea and the lives of those who live on the coasts. The third works towards a conclusion. From the first section, in ‘The Book I Open’,

Geoffrey Heptonstall’s ‘Rites of Passage’ is split into three sections, ‘The Bird of Paradise’, ‘Oceans and Islands’ and ‘More Songs for Her’. The first has a focus on reading and music, gateways to paradise perhaps. The second focuses on the sea and the lives of those who live on the coasts. The third works towards a conclusion. From the first section, in ‘The Book I Open’,

‘In a sacred space the parchment dries

the ink that writes of paradise.

The eyes of the future open.

the first word moves at last.

These words I have heard in unlikely places

where voices are bound to the sound of reading

of the mind’s silence surrendering

nothing beyond the measureless extreme.

Its gentle rhythm lulls the reader just as a library generally would. But this stillness opens a gateway to other worlds, other possibilities. It creates an idea of transport yet doesn’t move anywhere. The language is reverential, elevating the act of reading and bringing these stories alive to a form of prayer. Turning to music, in ‘Shostakovich’,

he knows shall be forbidden.

The flesh and bone of him feel lighter

with the absence of want before

all the meanings of a single movement

until his music is a river

flowing between many cities,

and into the wastes

where truth must counsel caution

at noon and midnight.’

I’m not sure why the ‘counsel caution’ is restricted to ‘noon and midnight’ unless its referring to the idea of the stopped clock being right twice a day. Shostakovich’s career began under Stalin and the composer found himself in and out of favour. His fourth symphony was denounced but his fifth was praised. This duality of being in or out of favour dogged his career. So, the poem’s duality of music flowing into cities or into wastes feels right.

In section two in an unnamed location, ‘At the Whaling Port’ starts

‘A gothic arch of bones

raised as the whalers’ memorial,

of the hunter’s harpoon thrust

in the darkness, in the deeps

before the pursuer is pursued

over a less than celestial sea

by that monster, mortality.

Feel the wound as you pass through.’

The tone is judgmental and doesn’t allow for people desperate to make a living. The poem ends,

to the harbour’s star-like lights.

Maritime museums tell none of this.

Leviathan is the watchword

that sails to the world’s end,

a sea of blood, an isle of bones.’

The pirate’s stories capture the imagination of youths who don’t know any better until they come to live it and have to separate myth from reality. The implication is that boys brought up on tales of monsters at sea are tricked into taking a dangerous job that they wouldn’t do if the tales hadn’t seduced them and they knew what they were actually signing up for.

The poem ‘Maggi Hambling’s Walls of Water’ is named after the exhibition at London’s National Gallery of eight large paintings (over 6 x 7’) inspired by watching stormy waves clash against the sea wall at Southwold in England.

‘The painting of water in motion

is the sound of a thinking mind,

the sensuality of silence

and the rising of earth into heaven.

Another idea of order perhaps

with a critical whisper

on the gallery wall

The eye that sees the water

is the hand that feels the motion

in the mind that speaks

of eternity all the time.’

The swells of huge waves can seem to be ‘rising of earth into heaven’. But I struggle with the image of the action of painting these thunderous waves being ‘sound of a thinking mind’ and I’m not sure whether it’s the passivity of ‘thinking’ or its apparent redundancy. The notion that painting is a silent activity is a romantic one. The last stanza feels as if it’s straining towards an aphorism that isn’t there. Maggi Hambling’s works generally are the capture of a moment, a means of communicating to the observer what the painter witnessed and to make the observer feel as if they were present when the art was created; that seems to be contrary to the idea of eternity.

The final section returns to the idea of paradise, In ‘Birds of Passage / Rites of Paradise’,

‘Of paradise there are rumours

Our waking eyes are brushed

by the wind that stirs the dust

as far as a mind can imagine.

All else is speculation

as distant as the night stars.

Now from eyes that can see

a summoning of elegant reflections

of certain doubts we may have.

their words on waxen wings

speak to heal the pain of things.’

It’s lyrical, its language is consciously poetical, ‘summoning of elegant reflections’, ‘floating feather-like’, ‘waking eyes are brushed’, ‘speculation as distant as a night stars’, and blurs the boundaries between the doubtful night speculation and the morning’s certainty.

In ‘Rites of Passage’, Geoffrey Heptonstall has created a collection of lyrical poems that consider the transforming ability of words to take readers to other worlds or other possibilities. His poems reference classical literature, classical music and art. They show the writer is aware of the craft of language, sound and rhythms, however, the language is often passive and some of the poems feel as if they were an exercise in writing rather than something born of a need to write.Bottom of Form