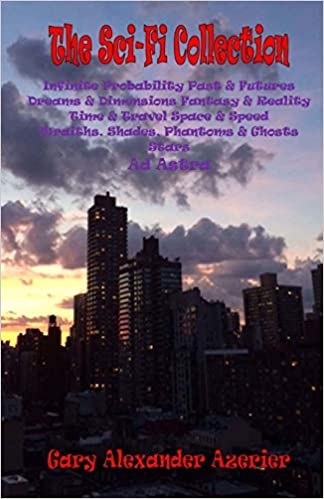 Striking lines of Gary’s worth reading in his definition of this genre are: “Science-Fiction may not offer precepts, tenets, morals and codes for which to strive and those by which to live but it can offer dreams and fantasy, the impossible, and that which science has not achieved…yet!”

As I write this review for his book it would not be right to spell out all the details in the stories. These are for you to discover. But each tale is a depiction of marvelous and astounding fiction. I will, however, offer the gist of some:

Constellation Station tells the story about Karl, a young boy who takes a “Bullet” train that travels to stellar constellations.The train, several stories tall and enveloped in bright light and boundlessness takes Karl to adventure, darkness and the unknown. The interesting interior compartments are described, but as Karl peers out his window so are the stars and constellations that sweep by: Orion, the largest and prominent constellation in the winter sky (introducing itself in a loud, powerful and reverberating voice) Cygnus, the Swan, Gemini, Auriga, and several others. At the end of his journey Karl is presented with a souvenir, a Book of Maps…with contains the strange twist and surprise for Karl and the reader!

Shipwreck is a chronicle of interstellar exploration where some extraordinarily strange phenomena occur that defy the anticipation of both the ship’s captain…and the reader: attaining unheard of speeds beyond the cosmic limits…; one discovery leading to a most unusual climax; a curved…not a flat Universe…and the tale does not stop there….

In Speedtrap, Harold’s escape from the Earth (via a do-it-yourself space ship obtained from Amazon Steroid) ends frustratingly for poor Harold…but is mind blowing.

The Return is so very full of memories and worth a read.

In A Question of Time readers may find answers to some fascinating questions:
If the Earth slowed down and one travels through fewer days and years, if the planet stopped altogether…would one be younger in time? Would one age at the same rate as “normal?” If the planet sped up, creating more “years”…would be be older, younger?

In The Last Stand the author asks what happens to a man’s mind when a lone astronaut finds himself stranded on a distant alien planet? I suggest you go for the answers!

Gary’s Password is rather humorous…and takes us to the regrettable password at graveside! Sad but I found it marvelous.

In Deja Vu Deja Vu he puts forth the question of a Universe with no end… and what a terminus might be like. His answer considers space, time, curvature and what lies beyond the boundary… which I found to be a revelation!

In Cordovan the question arises of: Was it a dream, no dream, or what was it?
The story is chilling.

In Shade, the unusual description of an antique shop and a purchase made therein leads to an old photograph coming to life…. The careful reader will discern the strange identity of the phantom, wraith, shade and ghost in this bizarre tale.

These are but a few of the stories in this collection. And honestly, I have never come across such a fascinating book as this. Each of Gary’s stories took me to a wonderful world so full of imagination, leaving me to wonder what if such worlds actually existed? Stunning and visionary! Original.

We wish that this book travels across the curved universe…(which, in his Afterword…Gary relates what may happen when it is discovered how and why the Universe exists…….) This is yours to find out!