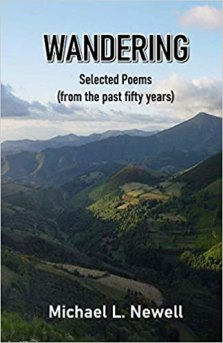 Going through the “Acknowledgement page”, it seems to me that Michael has been into writing since 1971, and he has almost 15 books to his credit so far, and many of his poems have been featured in various periodicals. He deserves lot of applause from us for this. Michael, we pray that you add on to many more books in the coming future.

Going through the “Acknowledgement page”, it seems to me that Michael has been into writing since 1971, and he has almost 15 books to his credit so far, and many of his poems have been featured in various periodicals.  He deserves lot of applause from us for this.  Michael, we pray that you add on to many more books in the coming future.

His style of writing seemed very simple but strikingly to the core.  Meaningful and amazing words woven into his poetry fascinated me.  It was like reading small awesome stories.  This is something which I have yet to come across.

Very skillfully he penned his poem on Gift of Bamboo Stool and its placement.  His asking for a  second Childhood as in Eyelifted Moonhigh: An Incantation will leave the Readers mesmerized, I am sure.

The lift of a Yankee Trader in just few words and ending with “All my life I have supported others, now I need to be alone with my wife, touching her sails release, they blossom in the night cannot be left unmentioned.

He has offered a treat to his Readers as he describes himself around his life in several creations like The Man with the Glass Head. He compares the feel of towns on hills sad as fairy tales.  The perfect morning scene at 5.45 A.M. on a rainy day,  “I dampen in the slow rain, my hat comes off, shirt opens, face tilts up, I could hear a snail crawl”, Perfect description on Early Summer Day, Late July in Simi Valley with he and his dog, his description of himself as in The Intruder, “I came here a refugee from cities, but outside is something I bought with me, When I touch Carol, she shivers and reaches for cover”.  The way he has penned different Postcards from Abu Dhabi is just mindblowing.  That leaves me with an imagination that may be Michael must have stayed there from 1993 to 1995 because he has written about the women, robes of the men, morning rain, how being alone there is to be like fog, and about the desert island and the night sky.   His description of music at the weddings, presence of the guests, and all that happens therein as in Vintage Inn, Ashland, Oregon (4/16/81) left me wondering of the fact that he has captured all the miniscule details in this.

Readers will definitely wonder at his imagination when they read the perfect chemistry between 3 ladies as described in Three Old Ladies Lunching.

As in Separating and comparing that separation with amputees was just amazing.  All the emotions felt were so very well penned.

What any Poet generally expects is so well written in his poem The Poet, “No drama, no momentous occasion, just a reading of an ordinary poet’s ordinary words”  Being a Poet myself, I am in complete agreement with his words.

His love and affection for his family is much evident in That Hand which was never withdrawn, “I reach for that hand which was never withdrawn, I find only damp air and oceans between us”, and in My Parents Phone Me overseas, Cradle Song, “And the wind wraps night in an awkward tender grip and rocks us all to sleep, father, brother, sister, mother, tree, bush, stone…”  In his Remembering, as he remembers all the members of his family  while he watches the old photographs taking him back to his family home.  “I am still alone, still silent, still draped in confusion, unable to reach through time, and seek a blessing”.  I felt so touched just because I too, am required to stay away from family due to my profession.

There is also a philosophical tone which I noticed in his writing as in A Memory of Water as he wrote, “There  is a history here, yours and mine, a chronicle of cells growing more complex, moving towards dry land but never forgetting, always coming back to the shore to dangle a foot, a toe, a sleepy lolling around”.  As in his Psalm in a Rainstorm where he imagines wind to be our father, ocean as God, mountain being our obdurate self, then the rain is mother to us all, bathing us in tears long rippling fingers of forgiveness.

As in Estrangement, “The strange has grown oddly familiar and the familiar oddly strange…

As in Choosing, “Each window holds a world, no two quite the same, each world holds a you, choose one,  the others forever lost”.  “Ain’t these masterful???

Wandering Through Memory’s Back Alleys  is his longest poem which is a MUST READ.  The opening lines are so profound “Live enough places and nowhere is home, but everywhere one meets people who live for decades in head and heart”.  The poem is full of memories about café in Tashkent, Irish folk music, about a small Russian woman, Mexico, Syrian barber in Kuwait .  Yes; and you must read his prose on Wandering; the title of his book. I loved this concept. “The whole experience I have come to believe is a metaphor for my life and how I have lived it” speak solemnly about his life in totality!.

The last poem on Let us now give Thanks for is the best, very meaningful and profound.  None have thought of giving thanks to all the aspects of nature which he has given justice.

To sum up, Michael’s book is all about life and its different aspects.  I am sure his writing is coming from his various travels to different locations.  He seems to be a Traveler at Heart; yes; his writing says so!  His book gives glimpses of his memories of his childhood, growing up stage, family and travels.  All in one!  I enjoyed reading his book and I am sure Readers too will.

Michael, we wish your book creates its own benchmark and milestones as it travels far and wide.  All the best to you for your future endeavors.