THE CITADEL II by David Stone 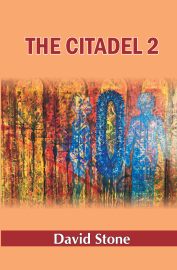 THE CITADEL II by David Stone

David Stone is a Surrealist in the school of Salvador Dali, painter of, among other things distorted, melting clocks. But also a writer whose Surrealist Literature includes Hidden Faces (by Salvador Dali, translated by Chevalier). He is found amongst the writers Federico García Lorca, Arthur Rimbaud, Antonin Artaud, and Andre Breton. a style of art and literature developed principally in the 20th century, stressing the subconscious or nonrational significance of imagery arrived at by automatism or the exploitation of chance effects, unexpected juxtapositions, etc.

David Stone is a Surrealist in the school of Salvador Dali, painter of, among other things distorted, melting clocks. But also a writer whose Surrealist Literature includes Hidden Faces (by Salvador Dali, translated by Chevalier). He is found amongst the writers Federico García Lorca, Arthur Rimbaud, Antonin Artaud, and Andre Breton. a style of art and literature developed principally in the 20th century, stressing the subconscious or nonrational significance of imagery arrived at by automatism or the exploitation of chance effects, unexpected juxtapositions, etc.

The first poem of this book sets the tone as it talks about men as “warped souls hurried up the scaffold”, and what may perhaps be Mankind’s aim for space and further, his possible self-destruction. But more so ‘the great’ in mankind plotting to destroy those struggling for the good of mankind : “the desperate plot of Haymarket,” the betrayal of that Union Movement in the United States.

In the end, this is man’s war with the universe brought on by his war with himself which threatens to destroy all reading, even the availability of knowledge. The “locking” of the libraries Stone speaks of. He seems to perhaps be referring to men as “bizarre characters” in nature “on shoals” and in the cities arriving in “busloads.”

In the poem Citadel III/2 the author says that “Ra” (the Egyptian sun god) has ”scorched” the earth’s bright plant life,  and by the “broadcast” of “bizarre arrests” “Federal officers” once occupants of a “saloon” are now considered a “knightly society.”  Has he destroyed these arrested men leading to the future destruction of mankind? These references are to the worship of a sun which casts light or UV rays which can cause cancer, and bring on destructive storms, flooding, etc. The sun, the strength of whose light is caused by man-made pollution : Global Warming. Referring, as well, to the American form of religion which ignores it.

In the next poem we see that “A restaurant opens on Wabash Street (The Wabash Arts Corridor in Chicago) Frankfurters and Hamburgers at high prices (gold speckled I imagine)” and there is a “a food truck for “conventions” for “day traders (bitcoins)” ; traders dealing in imaginary money, like all money, created by men. “Hotel guests…conceal abodes of silence.” Turning modern art into hypocrisy : a joke.

This book is a thorough condemnation of modern life ! David Stone is a truth-teller.  He is a Symbolist. The following are Common Examples of Symbolism in Everyday Life :

The red rose stands for love or romance. In American politics red represents both Communism and the Republican Party. Black in the Western World is a symbol that represents evil or death, a ladder may stand as a symbol for a connection between heaven and earth, as well as ill fortune, and a broken mirror may symbolize separation, and bad luck. The white dove is a symbol of peace.

This is a form of metaphor, a figure of speech that uses symbolism, comparing two things that aren’t similar. Then it proves that they have something in common. In a metaphor, there is an additional meaning to a word. It is thusly an example of symbolism.

Early in the nineteenth century, it was felt that the symbolic value or meaning of a work of art stemmed from the re-creation of emotional experiences in the viewer through color, line, and composition. In painting, Symbolism represents a synthesis of form and feeling, of reality and the artist’s inner subjectivity. Stone uses a great deal of Symbolism, derived from a loosely organized literary and artistic movement that originated with a group of French poets in the late 19th century, is found in painting and the theatre, and influenced the European and American literatures of the 20th century. Symbolism is the use of symbols to signify ideas and qualities, by giving them symbolic meanings that are different from their literal sense. Symbolism can take different forms. Generally, it is an object representing another, to give an entirely different meaning that is much deeper and more significant. The Symbolist Movement in Literature, first arriving in 1899, and with additional material in 1919, is a work by Arthur Symons largely credited with bringing French Symbolism to the attention of Anglo-American literary circles. Its first two editions were vital influences on W. B. Yeats and T. S. Eliot. There is in his poetry much reference to historic personages. For example, he refers several times to Charlemagne (c.742-814), also known as Karl and Charles the Great, who was a medieval emperor who ruled much of Western Europe from 768 to 814. In 771, Charlemagne became king of the Franks, a Germanic tribe in present-day Belgium, France, Luxembourg, the Netherlands and western Germany. Charlemagne is known for sponsoring the acquisition of knowledge, the Arts and the preservation of both. Thusly his name symbolizes what is known as the Carolingian Renaissance.

For the reader cynical about modern life, for the inquisitive reader, this book is a treasure trove. It is a reaffirmation for the educated and the reader with a ‘different view of modern life.’ I recommend it for its particularly intelligent view of our life and times.

Review by Mary Barnet
Author, Poet, Reviewer and Editor
Critique: Haiku for the 21st Century : The Haiku of Sayumi Kamakura (Cyberwit. 2018),
At the Top : The Haiku and Poetry of Ban’ya Natsuishi (Cyberwit, 2019)
Poetry: The Train I Rode (Gilford Press, 2018),
Founder and Editor In Chief of PoetryMagazine.com now 24 years on the internet