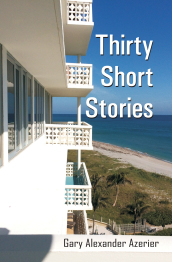 Only experience can lend the flavor Gary Alexander Azerier brings to his marvelous, and well written storytelling adventures. Yet the prevailing similarity of things commonly human become the stuff of the work making it enjoyable fare for any reader of any age.

Not unlike the historical fiction writers of old, who had to apprise us of the details of the world in which their characters acted out their adventures, Gary Alexander Azerier creates character after character that he may, or may not have shared experience with, but those characters are fully developed and real entities.

His first story in this collection Auld Acquaintance is an honest evaluation of retired life, away from the glitter of modernity, surrounded by others in the retirement community, who have shared life with one another in period, if not in place. We are introduced to the idea of finding people who were in your milieu, suddenly gone to some ‘greater reward’, a detail of elder lives rare in those of the young.

That story also shows how even an oncoming senility can save a grief that their mate had, that brings a glint of humor to what may have been angst.

In Chock Full we meet one by name of, simply, Jack. His lifetime of work for a New York Ad agency behind him, retired now, he gets a call for a new Voice Over, his specialty in the day, and the money is attractive enough that Jack agrees to make the recording. Thinking on it he realized his unique ability to imitate famous, recognizable voices of his day, would be somewhat out of place in the world now, who barely remembered, if at all, the so-called famous voices he was handy at duplicating. But that was up to the agency and he is on his way.

His trip into what had once been his playground New York City was disappointing in that all the landmarks he knew and loved were gone. He was irked by the people on cell phones, walking around, insulated against one another. He especially missed the familiarity of a favorite Coffee Shop now gone, replaced by a skyscraper. Jack is more interested in the environment’s change than getting to the appointment on time. And that is where we leave him, in an almost existential, Camus like existence, not unhappy, just aware.

What I got from this wonderful book by Gary Alexander Azerier was a warm feeling, a sense of wonder, and a great sentiment for the people of this Earth and the feelings that seemed to be generated merely, and extraordinarily by our own sojourns through life.

I heartily recommend it for people anxious to read a testimonial to Humanity at its best.

Review by Mary Barnet
Founder and Editor In Chief of PoetryMagazine.com
Critique:
Haiku for the 21st Century : The Haiku of Sayumi Kamakura (Cyberwit. 2018),
At the Top : The Haiku and Poetry of Ban’ya Natsuishi (Cyberwit, 2019)
Poetry: The Train I Rode (Gilford Press, 2018),

The passengers are listed alphabetically, followed by their seat number. It has been many years since your reviewer has flown and I readily admit it took me a couple seconds to realize what the designators designated.

The Gentleman Lion and Other Stories -- by Martin Jones

This collection of eleven short stories by Martin Jones, is a delight to read. The stories are literary, with hints of genre in some of them. Each story is different from the others and cover ground from chance Meeting the Payzaks on a flight to Vegas with a stop off Waiting for the Assassins to the last and title story of facing your mortality and destiny.

Stories that seem true or maybe even memoir make up this winsome and often dark turn of tales in this new offering by Moore.

Poe understood very well the significance of "invention, creation, imagination, originality" in fictional literature. We notice these characteristics in nonfiction and fictional short stories by Floriana Hall. The stories depict life in its real complexities, and "convey definite inspirational messages. " The stories are remarkable for their variety. "Of Prayer and Angels" reveals her belief in angels. The story is full of tenderness and pity, as the author illustrates how her faith in God was intensified at the age of seven in the summer of 1934. "The out-of body experience had a definite effect on my life." "Shaun's Quest" is a children's story, which teaches tolerance.