The Ethnosphere’s Duality By Heath Brougher 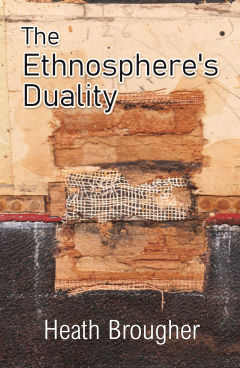 The Ethnosphere’s Duality By Heath Brougher

The poet opens with existentialism for the 21st century. He wishes to explore as Nietzsche states and as he emphasizes “what creates Creation?” Poet Heath Brougher has adopted many of the values of existentialism examining both consciousness and experience. The following quote from Nietzsche much more eloquently states, this book is not meant to be understood by just “anybody”, it’s for others who are on a similar philosophical wavelength as Brougher himself states.

The poet opens with existentialism for the 21st century. He wishes to explore as Nietzsche states and as he emphasizes “what creates Creation?” Poet Heath Brougher has adopted many of the values of existentialism examining both consciousness and experience. The following quote from Nietzsche much more eloquently states, this book is not meant to be understood by just “anybody”, it’s for others who are on a similar philosophical wavelength as Brougher himself states.

Brougher quotes Friedrich Wilhelm Nietzsche 1844–1900 in his book The Ethnoshere’s Duality. Nietzsche was a German philosopher, cultural critic, composer, poet, philologist, and a Latin and Greek scholar whose work had a profound influence on Western philosophy and modern intellectual history.

The Existential writing of the early 20th century includes the work of Franz Kafka who expressed it early in his novel The Trial, in which the protagonist Joseph K is entrapped by his entrance into The Law, which completely creates an abstraction of his life. Kafka also wrote Metamorphosis about a young man who lives  at home and upon waking one morning discovers he has been transformed into a giant cockroach laying on its back and unable to turn over.

Jean Paul Sartre picks up this estranged sense of existence in his novel Nausea, about a dejected historian, who becomes convinced that inanimate objects and situations encroach on his ability to define himself, on his intellectual and spiritual freedom, evoking in the protagonist a sense of nausea.

Albert Camus takes on the nihilist view in his novel, The Stranger, that takes his first-person narrative all the way to his own decapitation.

Heath Brougher poetry is a natural development of this work. He is co-poetry editor for Into the Void Magazine. He has won the 2017 & 2018 Saboteur Award for Best Magazine. His work has been a multiple nominee for the Pushcart Prize and Best of the Net awards.

Brougher is unique to the world of 21st Century poetry as he has forged a new wave of Existentialism by moving the philosophy into modern poetry, which is a forward motion that puts poetry into a new place in our lives.

In Brougher’s poem entitled Bombast’s Avalanche he expresses the extreme value he gives to the mind and to thought when he says :

Can inner-thought be just as profound and solid
as its corporeal cousin, the Diamond?
But he says of religion in the poem
Building Gods :

Imagination.
In Brougher’s poem Timewise, he discusses the changing of seasons from past years, due to Global Warming :

Though no surgical equipment
can repeal this Monster Season;

We see his condemnation of what he calls “these vicious computer screens” in his poem Digital Veins. He says in the same poem as well that “these robotic beasts are infiltrating.” And he also says that we humans:

In all my years of reading and writing poetry it is heartening to review a writer such as Heath Brougher who brings a modern slant to his poetry and derives his themes from the contemporary world. The fact that he follows a philosophy which also is very likeo that of everyday life for many around the world links him to the ‘new world’ that is developing all around us in juxtiposition to the generally fading faiths of the western world of today.

I enjoyed this work most highly on an intellectual level as well as for its vision and recommend it to all, not only the modern generations of today.

Brougher seems to be among the founders of a new school of great poetry of the contemporary world ! But remember he does not give up on the ‘New World’ but rather encourages us to reform it for our own sakes.

He is a poet who encourages change and I find myself inspired by him. You are really missing something if you do not buy this book. Read it !

Mary Barnet, American poet, published 86 Sonnets for the 21st Century in 2015 & is being nominated for a second time for a Pushcart Prize. Her first book, The New American: Selected Poems (Gilford Press 2006) was nominated for a Nobel Prize. It has been reviewed by Adam Donaldson Powell who calls the poems “carefully tailored pearls.” Janet Brennan, in her review of The New American, calls it “intelligent and stunning poetry.” Grace Cavalieri says Mary is “a light to many Poets and to the World.”