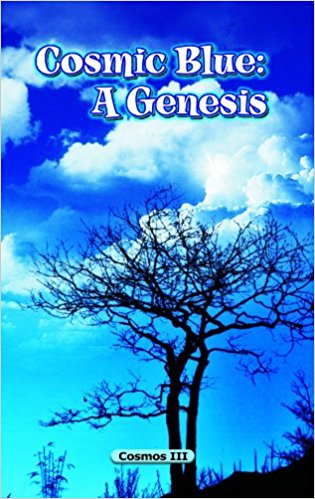 The most noticeable characteristic of Cosmos III in his poetry collection Cosmic Blues: A Genesis is his originality. His poetry collection is full of variety and vitality. The power of pure poetic expression is aptly visible in his first poem itself GL

The most noticeable characteristic of Cosmos III in his poetry collection  Cosmic Blues: A Genesis is his originality. His poetry collection is full of variety and vitality. The power of pure poetic expression is aptly visible in his first poem itself  GLOBAL BLUES: A POST - COLUMBUS DISSERTATION ON THE EARTH MOTHER: AN EXPERIMENTAL POEM where he  is criticizing the environmentalists and biologists  unable to resolve the problem:

Environmentalists and Biologists
theorizing, sampling and testing, Experimenting
wondering when how why and what to do
Fruitlessly running here to and fro
and the people being answered with
a Clouded may be yes, may be no.
His individuality is evident in his remarkable poem NAKED NEUTRALITY, which reveals that the poet is feeling disturbed as the
armies of guilt
wage war against the
armies of innocence
The truth is that he is a “devout disciple of Blake and Swendenborg” as revealed by him in the poem POZO.  His conscience hears “mind-searing screams” in the poem NAKED NEUTRALITY.
There is no doubt that  Cosmos III aptly succeeds in creating  some of the most striking effects through subtle images. For example, in his immortal poem  INTERNATIONAL MADNESS, the poet’s eyes are fixed upon  the sober enquiry of truth that  our planet might be extinct due to “Lethal rains of wholesale annihilation” in nuclear war. The poet has pondered deeply over nuclear holocaust, and probed sincerely in his mind. The opening lines of this poem show the poet’s capacity for strong and genuine emotion:
The abscess of territorial
claims, the neurosis of
Historical fear like a
Brooding cobra upon weak
Hearts have smitten peace
Lovers in many lanes.
William Wordsworth aptly defines “Poetry is the spontaneous overflow of powerful feelings.” This definition is fully applicable to these poems by Cosmos III.  The wide range of Cosmos III in his poetry collection extends the area of sensibility for the joy and advantage of the readers.
These poems reveal grandeur of imagination. Here we find the poems which show CosmosIII at his best. His imagery is well sustained in all poems. Muriel Rukeyser aptly remarks: “Poetry is, above all, an approach to the truth of feeling. A fine poem will seize your imagination intellectually—that is, when you reach it, you will reach it intellectually too— but the way is through emotion, through what we call feeling.” This critical observation is truly applicable to these poems by CosmosIII.
Cosmos III  has aptly employed ‘hard, dry image’ in his poems to unravel the predicament of contemporary society. These images are clearly visualized, concise, precise, and accurate in detail. Ezra Pound rightly comments: “An image is that which presents an intellectual and emotional complex in an instant of time.”  NAKED NEUTRALITY reveals a deft use of such images:
Dusk
like an
ebony sheet
settled hours ago.
armies of guilt
wage war against the
armies of innocence.