AZsacra ZARATHUSTRA - The Lotuses of Evil 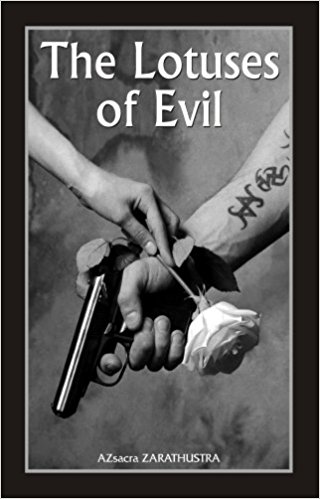 AZsacra ZARATHUSTRA - The Lotuses of Evil

The publication of The Lotuses of Evil by AZsacra ZARATHUSTRA reveals extraordinary power of imagination and originality. As a poetic artist, AZsacra ZARATHUSTRA feels that 17 syllable is not mandatory for haiku. The poet forges new measures to unravel l

The publication of The Lotuses of Evil by AZsacra ZARATHUSTRA reveals extraordinary power of imagination and originality. As a poetic artist, AZsacra ZARATHUSTRA feels that 17 syllable is not mandatory for haiku. The poet forges new measures to unravel  life's complexities and to arrive at 'the moments that take our breath away':

you'll have your death amongst

the blades of grass

the dew will do it

The above lines are full of passion transcending the limits of the world and corporeal self. The sustained intensity of emotions, almost incredible peaks of elemental force and majestic, luminous visions - this is ZARATHUSTRA's  greatest contribution as a poet. AZsacra ZARATHUSTRA's quest for divine spark inspires him to write about the distilled moments which resonate with his 'soul state':

has comprehended the leap of

has lost its way

the way of haiku

is the Way of

As a poet, AZsacra ZARATHUSTRA is most convincing and most alive when he seizes an emotion, looking it full in face. An intimate consciousness, which weighs, listens, penetrates the 'abyss' - (the way of haiku is the Way of Abyss) 'to fly into' rose-buds-this is a large element in the complexion of AZsacra  ZARATHUSTRA's poetry. Our planet hath need of 'New Forms of Mania' so that Buddha may subdue Death ("Satori of Shooting of Samadhi").  AZsacra ZARATHUSTRA is more simply and entirely occupied with 'leap of the tiger', 'Birth of Zero and Great Emptiness' than any other contemporary poet.

His genius is visible in several lines full of subtle complexity and epigrammatic force: 'we are not worthy of death', 'lotus is more frightening than the tiger', 'to become the venom for the children of the nectar!', 'the rose to be stabbed by its own thorns!', 'wounds of the lamb are above Christ", 'knives are held by wounds'. Ezra Pound aptly remarks: "An image is that which presents an intellectual and emotional complex in an instant of time." This wise observation is fully true about AZsacra ZARATHUSTRA's images in The Lotuses of Evil. AZsacra ZARATHUSTRA achieves continuous satoris by the technique of koans-riddles used by zen masters. This is evident in the poet's sudden awakening  to the Absolute. All great poets are able to compose great poems not by art, but because they are inspired and possessed. The Lotuses of Evil is a work of genius because it aims not at persuation but ecstasy; 'to turn yourself in One Single Hit!', 'to live only by Jerks of Death', 'to build Lost Emptiness'.  AZsacra ZARATHUSTRA is able to utter his  oracles with the sovereignty of  an inspired poet. This creates sublime poetry. "The sublime at the critical moment shoots forth and tears the whole thing to pieces like a thunderbolt, and in a flash reveals all the author's powers" (Longinus).

AZsacra ZARATHUSTRA is a well known Russian esoteric philosopher and poet. In Russia he has founded a Help Center for predators "MAYASTRA", where injured wild animals and birds are healed and then set free. Around the world AZsacra is known as a leader and ideologist of legendary TheaterOfCrueltyNOH, which continues developing "bloody" poetical ideas of Antonin Artaud, including here different deadly experiments on the body. Ancients rituals and initiations - are the main creative meta - language of this given manifestation of Nihilistic Mind.

AZsacra ZARATHUSTRA is a member of various international literature societies and associations: International group of the authors Taj Mahal Review (India), The Haiku Society of America (HSA), The Poetry Society of Britain (London), World Haiku Association (WHA, Japan). He is a founder of INTERNATIONAL POETRY PREMIUM FOR TAJ MAHAL REVIEW (India). He is included in the Editorial Board of international art and poetry  journal "Harvests of New Millennium".  Also AZsacra is a Patronizer and a Benefactor of The Academy of American POETS. He also conducts the enumeration of the  funds for The Walt Whitman Award. He is published in India, Tibet, Japan, England, USA...

Creative work of AZsacra is incessant quest of New Enigmas and Mysteries of Spirit for conquest and strengthening of ABSOLUTE POWER OF POETRY. Synthesizing various symbols and images he, in a very whimsical way, in very inconceivable combinations, unites and empowers energies of Light and Dark. Takes as allies Void and Nothing. Orders the weak to become the Strong! AZsacra craves for overcoming that lying since earliest times "burnt brand" which is put on Good and Evil. Speaking words of Nietzsche: he always attacks standing "beyond Good and Evil". Rigidly standing up for and empowering further conquests of "damned poets", such as Baudelaire, Rimbaud, Ezra Pound - AZsacra has his own interpretation of "absolute negativeness experience", basically -  from depths of the East! In this he takes start from "dark philosophy" of Nagarjuna, traditions of classical Japanese haiku, rituals of Tibetan mysticism, Indian Tantra, and supplements all these with most bursting extremities of Dao and Zen.

One can surely state: all poetical and philosophical books by AZsacra, especially "NEGATIONS", "THE LOTUSES OF EVIL" and "AMERICA: INVASION OF THE HEART", create some kind of long - awaited alchemical Synthesis of the Word, which results in uniting of the Western Wolf of Nihilism and the Eastern Dragon of Negation. Nothing of the West and Void of the East are uniting (in "a Holy Strategic Formation") in spite of all! From the abyss of rebellious, bloody poetry comes out and ascends in its glaring shining Free Spirit.

And this is, unconditionally, -  TRIUMPH OF POETRY!