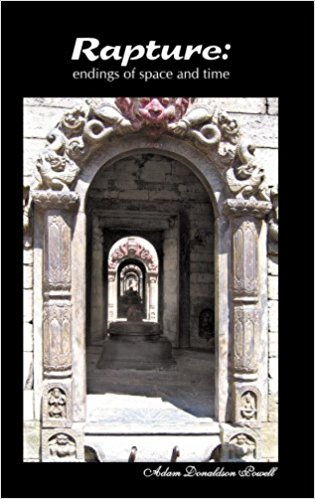 The publication of Adam Donaldson Powell's Rapture: endings of space and time is remarkable for revealing his varied talents- poems, photography and literary criticism. Powell's celestial inspiration concentrates itself on transmuting

The publication of Adam Donaldson Powell's Rapture: endings of space and time is remarkable for revealing his varied talents- poems, photography and literary criticism. Powell's celestial inspiration concentrates itself on transmuting "physicality / into crystalline light" ("Ascension"), his passionate quest for "Great Compassion" will be accomplished only when the whole world experiences "vibration" and listens to the words of the poet. Powell is quite aware of the bitter reality of the contemporary world:

I have sadly learned to expect
the relentless ravages of
war and emotional famine
brought on by the
rider on the red horse,
and the pestilence in the
saddlebags of the black steed.

The globalisation of
indiscriminate violence
is multiplied to
the power of the sixes,
and the Antichrist
smiles broadly at
the cancerous spreading
of fear and perdition -
rationalized by armies of
self-proclaimed truth.

The modern turbulence and murderous frenzy will surely result in wild agony, if

"messengers / of love and compassion / no longer dare to / speak out".

And finally we give birth to the God within ..

without reservation; and in generous libation.

Powell knows very well like Blake that "the ruins of time build mansions in eternity."

His search of utopia takes him to Nepal for mystical exercises of oriental sects.

Such poems transport us as well as the poet to a dreamworld of "vision and hallucination".

They exercise a secret magnetism on our innermost soul extracting from Buddhism its most harmonious and subtle Mantra "Om Mani Padme Hum". "Buddha Trance" is a vivid comment on the Life in Nepal where the poet finds "The exoticism of spirituality /Blended with indigenous capitalism".