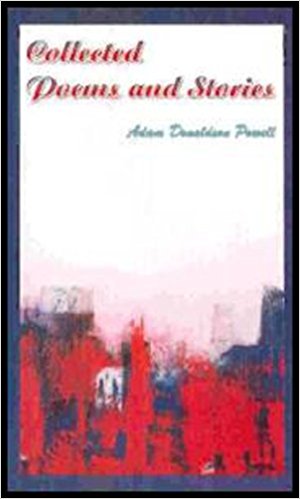 Adam Donaldson Powell's Collected Poems and Stories contains a number of outstanding poems having "exquisite variety and varied exquisiteness". In this collection, Powell reveals an incomparable craftsmanship proved by his classifying the poems into four

Adam Donaldson Powell's Collected Poems and Stories contains a number of outstanding poems having "exquisite variety and varied exquisiteness". In this collection, Powell reveals an incomparable craftsmanship proved by his classifying the poems into four different cycles: Poetry Cycle 1 where the poet discovers the Magical Tarot through verse, Poetry Cycle 2 is an admirable and genuine effort of  composing short stories through verse, Poetry Cycle 3 is emphatically about the Cretan myths, and in the final Cycle 4 though subtitled "Notes of a Madman", we find no trace of any kind of sensationalism.

Powell's poem "Adjustment" is very thoughtful and penetrative. The poet is well aware of "The impartial Lords of Karma", and the path of virtue is not a bed of roses:

Over the heads of the righteous

Hovers the pendulous blade of

The Daughter of the Flaming Sword   p. 17

"The Hanged Man" is characterized by a spiritual quest:

But he who sublimates

Himself to the Divine Plan

Recycles the elements to the

This yearning leads the poet to invoke "Energy of the Divine", and the source of  this energy is present only in "the gaseous, primal roots of The flaming triangle" ("Suit of Wands"). Powell calls "the wise journeyman" "to heed celestial warnings" ("Suit of Disks"). The poet is in quest of  "divine light beamed from The eternal flames of the sun" ("The Sun"), "spiritual rebirth", "the eternal vibrations of the Source" ("The Aeon"). He is aspiring "toward that which Must be accepted on faith alone" (Notes of a Madman"). The most notable element in Powell's poetry is his passion and hunger for eternity. Even in those poems where he is reconstructing the Cretan myths, we find "the yearning of  The soul for individual expression" ("Prologue1"). The poet emphasizes that "Treasures of Self-discovery" will be revealed only to the "passionate" souls. Powell's "pursuit of divine retribution" is based on "faith alone" ("Notes of a Madman" ). The "glimpse of the Unknown" is made possible only by "discovery of self" ("Mirror of Darkness"). There is in Powell the keenest sense of uniting "the Serpent" "with the Regenerative Spirit" ("The Eye of the Triangle"). Powell's poetry has a marvelous quality of submitting itself persistently and unflinchingly to the "Valley of Soul making".

Powell's Collected Poems and Stories also includes two wonderful stories of horror-"Useless Occupation" and "What Jonny dug up". The book is dedicated to the memory of Tor Vågli (1949-2004) and the countless Asian tsunami victims of 2004.