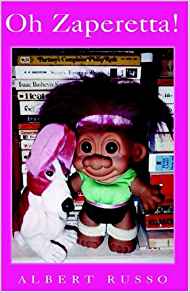 The narrator of Albert Russo's novel Zapinette Video is the wise-child Zapinette. The stream of conscious technique is employed by Russo to unfathom a child's consciousness and psyche. Russo unravels the stream of a young girl Zapinette's consciousness, her soul's mysterious life and intensities. The novel reminds us of  Joyce, Nabokov and Lewis Carroll.

Highly acclaimed by James Baldwin, Pierre Emmanuel, Paul Willems and Edmund White, Russo's writings have been translated into several languages. In the second novel Zapinette Goes To New York, the wise-child reveals a greater maturity. She even falls in love with a boy from Staten Island. Unky Berky tries to 'rediscover America with fresh eyes'. Euro-Zapinette reveals her most exalted mood in the multicultural Belgium. No more she thinks of Disneyland and Coca-Cola. Aware now of  the European colonization, Zapinette is now awake to the need of tolerance. Russo's vision is marked by an inner veracity, and it is nothing short of a miracle that through the creation of Zapinette, Russo is able to grasp the root of  the things by her witty and acute reflections, pregnant and random suggestions.

Russo's greatest achievement and main attraction throughout Oh Zaperetta is in exploring  Zapinette's highly eloquent consciousness fascinated by various milieus, and thus creating a subtle design of multiple vision, which results in her self-realisation. Oh Zaperetta is an 'interior' novel, because Russo is revealing all those thought-sequences, which occupy the consciousness of Zapinette. One of the best illustrations of  Russo's sense of  humour is evident in those scenes which describe a revised version of Bible's Ten Commandments:

To 'Thou shalt honour your father and mother', I have added, "not if  your dad ran away, leaving you and your mom on the dole, without a single farting...For 'Thou shalt not kill', I had to specify, "In case you get shot at by snipers like in Sarjevo and they missed you, throw back a hand grenade, unless you consider yourself a target not worth two farthings."

This whole passage is worth reading to understand what Russo is after. He is not evoking Rabelais' uproarious laughter. He is discovering the pathos in the comical situations. What is extraordinary about Oh Zaperetta is that Russo 'awakens and enlarges the mind itself by rendering it the receptacle of a thousand unapprehended combinations of thought'.