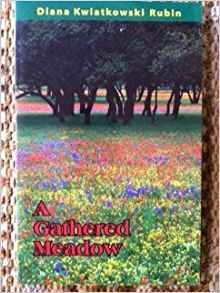 Diana Rubin's A Gathered Meadow includes several of her award-winning poems, and also poems titled "Emily Dickinson", "Edna Vincent Millay", "Amelia Earhart", "Edith Wharton". No doubt, the poet reveals a capacity for strong and genuine emotion. The following lines paying homage to Emily Dickinson have the power to move us:

Your voice is my psalm, whatever the hour,

For you breathe life into my quaking soul

By accident yet poetically on purpose.

Sing to me now, Emily, teach me to chant.

Wordsworth's definition "poetry is the spontaneous overflow of powerful feelings" seems to be true as we study her poems. As a poet Diana Rubin exhibits remarkable artistic workmanship. Her lyric "Hush" has grace and dignity

Hush, this is silence

kissing of our eyes

The style of A Gathered Meadow shows the poet's imaginative power. The merit of her poems lies in the musical quality of language

But the sting of your death

cuts into the wind-a razor's tune

over the edge of my soul.

I shake for I still hear you singing.

We notice a natural movement of the lines in her poems:

The bleak wail of Poland

is a long, languid scream

Diana Rubin has dedicated this excellent collection to her Creator for giving her a 'rare gift.' No doubt, A Gathered Meadow is a wonderful work of art revealing the poet's innovation and varied experience. The collection is marked by an intense understanding of the human heart:

For my grandmother's love

can outshine all darkness

with her collection of wealth:

the twinkling and precious secrets

learned throughout a lifetime.

My grandmother is as ageless as love

for she and love are one

The wide range of Diana Rubin's poems extends the area of sensibility for the joy and advantage of the people. She has "a passion and understanding far beyond her years. " (Denver Stull)

Diana K. Rubin from NJ, USA; published both nationally and internationally; written several collections of poetry, two collections of short stories and a cook book. Her honors and awards include nominations for Pushcart Prize: Best of Small Presses and the Pulitzer Prize in Poetry. She is reviewer for SMALL PRESS REVIEW and SMALL MAGAZINE REVIEW and served as Contributing Editor for POET magazine and as a judge for the American literary Magazine Awards. She is currently Reviews Editor for NORTHWOODS JOURNAL and received the POET OF THE YEAR AWARD in 1999 from Sparrowgrass Poetry Forum. Her latest poetry titles are Sea Burst Of Soul and A Gathered Meadow.