Songs and Poems by Felice Picano Review by Jennifer Wenn 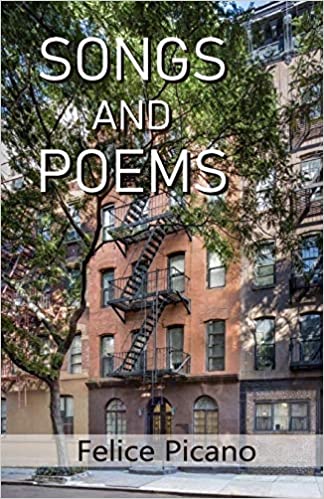 Songs and Poems by Felice Picano Review by Jennifer Wenn

A number of the early items predate even Deformity Lover, some of them thought lost until recently.

Songs and Poems by Felice Picano

Songs and Poems is noted American writer, publisher and critic Felice Picano’s latest book of poetry, his first since 1978’s The Deformity Lover and Other Poems.  In Songs and Poems Picano, a founder of modern gay literature, has authored an eclectic set of pieces, split into two groups:  “Early Songs and Poems” and “Later Songs and Poems.”  This slim volume focusses on acutely-observed portraits, many being of people (some who have passed on) and relationships.  As the title implies, in both sections we shift between simpler song lyrics and a variety of poetic forms.

A number of the early items predate even Deformity Lover, some of them thought lost until recently.  One noteworthy work in the early grouping is a set of selections from “On the Morton Street Pier:  A Poem Suite”, six snapshots of one of the main sights of the West Village, the historical hub of gay life in New York City.  There are also homages to the celebrated writers Edgar Allen Poe (“Is This It, Mr. Poe?”, which also holds a melancholy mirror up to the author), Emily Dickinson (“Homage to Emily D.”) and, most notably, W. H. Auden, with whom Picano had a close friendship (the beautiful “In Memoriam:  Wystan Hugh Auden, 1973” which the author worked on for some years):  “How can you hear an era end/in the whoosh of a push-pad/supermarket door?/Whistlings in the rubber grooves,/gravely intoning, ‘Auden’s gone’?”

The later portion ranges emotionally from the exultance of “Lifted” to the sadness and nostalgia of “My Mother’s Life.”  The anchor piece is the four-part “Window Elegies”, which first appeared as a chapbook in 1987 and won an award from the Poetry Society of America.  This is a brilliant, aching portrait of the rise and fall of a relationship, replete with architectural and environmental images (“We stood in a row of matched windows/each one spangled with the dark,/coordinated as though in a De Chirico/portico through which a draped/and fleeing figure weaves/her moon splintering night.”).

This is a very accessible work, although the four interesting ekphrastic pieces in “Repaintings” do benefit from searching out the art works that inspired them.  Throughout the whole there is an abiding sense of longing, loss and awareness of mortality in contention with joy in the moment.  Definitely recommended.

The Pride Villager will not be out until early April.  I will make sure you the the e-copy as well as a hard copy.

Glad to hear about the vaccine.  We are still waiting here in Ontario.

Enjoy your day and stay safe.

To the Man in the Red Suit by Christina Fulton

Christina’s debut collection “To the Man in the Red Suit” shows a cavernous world of darkness and the aftermath of a father’s suicide.

The poems in this collection by Dianne Bates contain many fine lines and images,

They are an assembly of words called on to negotiate the fine line between succumbing to life’s onslaughts and prevailing over them.

Steen writes gripping, thrilling poems in this thoughtful collection. It’s everything you’d want in a poetry book. His lines get under your skin as if he gets how you really feel.

A Fine Line: A collection of poetry by Dianne Bates (Cyberwit) - Reviewed by Kuen Peters

I freely admit that there’s much modern poetry that I don’t understand. A lot of it is probably very good and profound, I’m just not smart enough to appreciate it. So it was with some trepidation that I began reading A Fine Line, a collection of poetry by Australian writer Dianne Bates.

Felice Picano has written over thirty books, mostly novels, short story collections, memoir, even some plays and screenplays, but Songs and Poems is his first poetry collection since The Deformity Lover and Other Poems (1977).