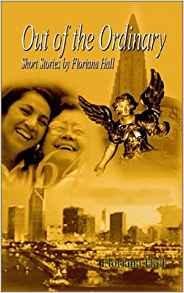 Poe understood very well the significance of "invention, creation, imagination, originality" in fictional literature. We notice these characteristics in nonfiction and fictional short stories by Floriana Hall. The stories depict life in its real complexities, and "convey definite inspirational messages. " The stories are remarkable for their variety. "Of Prayer and Angels" reveals her belief in angels. The story is full of tenderness and pity, as the author illustrates how her faith in God was intensified at the age of seven in the summer of 1934. "The out-of body experience had a definite effect on my life." "Shaun's Quest" is a children's story, which teaches tolerance.

"One Day Later" is about the horror of the terrorist attack on Sept 11, 2001. The most brutal tragedy perpetrated by the air-borne suicide missions shook the very fabric of culture and human values. Floriana, the versatile author, has also included several of her poems. What emerges from her poem "America Under Attack" is the intensity of feeling at the terrorist attack:

The children are having trouble sleeping,
Families of victims are still weeping,
Nightmares of blasts of fire and ashes
Invading their dreams like whipping lashes.
AMERICA UNDER ATTACK (p.173)

The refrain AMERICA UNDER ATTACK adds to the artistic excellence of the poem. The stirring emotion of the poem is matchless. The stories will "help people cope in similar situations." Floriana says: "In the scheme of things, I am just an ordinary person like everyone else, but I believe I have been inspired to write to help others. " She is an extraordinary painter of life and manners, and there is an inherent moral purpose in most of the stories. Floriana asked herself: "What could I do, other than what I had already done, to help ensure that the world might be a better place for my having walked there? " In her stories there is not a single ungenerous or unkind comment. The stories at every step reflect Floriana's nobility of soul, her charity, her simplicity, and her ceaseless flow of kindliness. Each of the stories in Out of the Ordinary has a moral to convey, but the development of the story is never obstructed by the moral. Hugh Walker aptly points out that in Hawthorne there is a perfect balance- the story is the moral. The same is true about Floriana Hall's extraordinary short stories.